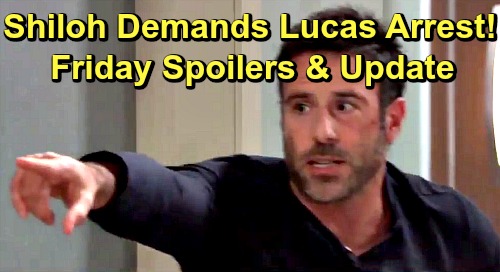 General Hospital (GH) spoilers for Friday, July 12, tease that Sonny Corinthos (Maurice Benard) will give Dev Cerci (Ashton Arbab) a lecture. It looks like Dev will do something Sonny disapproves of, which won’t go over well since Sonny’s done so much to help the teen. Sonny will question Dev’s true motives for coming to Port Charles, but Dev should apologize and smooth things over.

Laura Webber (Genie Francis) will have a slightly different solution when she speaks with Lulu Falconeri (Emme Rylan). She’ll urge her daughter to go get her husband back. Laura also thinks it’s time for a “Lante” reunion, but she’ll suggest Lulu should be the one to step up and make this happen.

After Finn explains that their previous romantic involvement, Chase will grill Hayden about what happened on The Haunted Star. As he checks out Hayden’s file, he’ll comment on her shady activities and wonder how Finn almost married her. On paper, Hayden certainly won’t seem like marriage material!

Talk will turn to Liesl Obrecht (Kathleen Gati), who suspects Hayden was the one who shoved her overboard. Chase will try to figure out if there’s any truth to Liesl’s accusations, but Hayden will undoubtedly play it cool. She’s perfected the art of being difficult to read. Hayden will wonder if she’s under arrest, but Chase won’t have enough evidence to hold her.

Over with Nina Reeves (Michelle Stafford), she’ll have some questions for Jasper “Jax” Jacks (Ingo Rademacher). Nina will ask what’s up with Jax and Hayden since they were looking cozy at the wedding reception. However, Jax will likely clarify that it’s not some serious romance. The kiss was more for Finn’s benefit than anything.

Jax intends to hire Hayden as Aurora Media’s CFO, so he’ll praise her skills and suggest that she’s been helpful to him so far. It appears Nina will have to remain curious about what Hayden and Jax are really up to. General Hospital spoilers say Valentin Cassadine’s (James Patrick Stuart) takedown is underway, but Jax won’t tip Nina off to that.

When Valentin realizes Jax and Nina’s working relationship is blossoming, he won’t be happy about it at all. Valentin will realize big trouble’s brewing, but he’ll have to be careful about how he handles it. In lockup, Willow Tait (Katelyn MacMullen) will get a visit from Michael Corinthos (Chad Duell). She’ll insist she has some great news and fill him in on her chat with Harmony Miller (Inga Cadranel).

Harmony finally saw the light and did everything she could to seal Shiloh’s fate. Willow will hope Shiloh will be taken into custody soon, but Shiloh will want a different man arrested. After Lucas Jones (Ryan Carnes) launches at attack at GH, Shiloh will pick himself up off the floor and demand justice. He’ll probably think getting Lucas thrown behind bars would boost his custody chances.

Shiloh just picked up the DNA results, so he should open them and get a big surprise soon. We’ll give you updates as other GH details emerge. Stay tuned to the ABC soap and don’t forget to check CDL often for the latest General Hospital spoilers, updates and news.