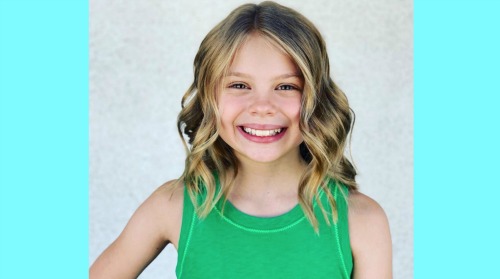 General Hospital (GH) spoilers reveal that one ABC soap actress made a big change for a good cause. GH fans know Scarlett Fernandez as Charlotte Cassadine in Port Charles. Charlotte became a bit of a troublemaker in Willow Tait’s (Katelyn MacMullen) classroom, but she learned from her mistakes and even got an award for her kindness by the end of the year. She made her papa proud!

Now Charlotte’s portrayer has a good deed to be proud of as well. Fernandez recently got a haircut and donated her spare locks to those in need. On Instagram, the General Hospital star showed off a great picture of her new look and explained the goal of her lengthy donation.

“10 inches of hair headed to an organization who makes wigs and hairpieces for kids who have lost their hair to Alopecia or during cancer treatment! #minifern,” Fernandez said. As a bonus, her hair looks fabulous! The new style really suits Fernandez, who was also sporting a huge smile in her pic. She has every reason to be happy with how it turned out, especially since someone else out there will benefit.

Plenty of General Hospital viewers also chimed in with supportive comments. “Such a very thoughtful and kind, thing for you do,” one Twitter user said. “And I love your new hairstyle. So pretty.” Another fan gushed, “Besides looking super cute, I love your giving heart!” “Way to go Scarlett,” said one more fan. “Always feels good to do something positive for others.”

As for what’s going on in Port Charles, there’s much more drama ahead. Charlotte’s out of school for the summer, so things have shifted to her papa’s problems for the time being. Valentin Cassadine (James Patrick Stuart) is facing an unexpected threat thanks to Jasper “Jax” Jacks (Ingo Rademacher) and Hayden Barnes (Rebecca Budig) alliance. They’re plotting Valentin’s takedown, so he’ll have to watch his back!

A post shared by Scarlett Fernandez (@officialscarlettfernandez) on Jun 29, 2019 at 7:42pm PDT

10 inches of hair headed to an organization who makes wigs and hairpieces for kids who have lost their hair to Alopecia or during cancer treatment! #minifern

A post shared by Scarlett Fernandez (@officialscarlettfernandez) on Jul 6, 2019 at 4:48pm PDT