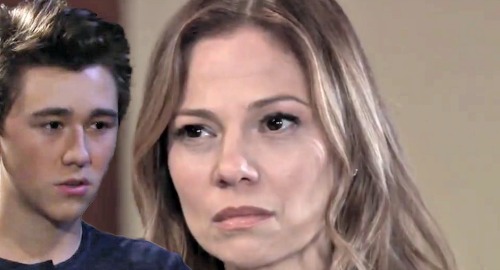 There have definitely been moments where Kim seemed like she was losing it. Kim’s imagination brought a shocker not too long ago. She hallucinated Oscar in front of her, and a baby cry came out when he opened his mouth. It was one of the most bizarre scenes General Hospital’s done in a while!

Of course, we also had this near rape on The Haunted Star. Kim assured Drew that she was ready to face the consequences of her actions. She pointed out that Drew could file charges, but he declined. Despite his anger over the incident, Drew knows Kim isn’t a monster. She’s just so distraught that she’s coming unhinged – and things could get worse thanks to Shiloh Archer (Coby Ryan McLaughlin).

Kim had an emergency therapy appointment and plans to get help through more sessions, but will that be enough? Probably not if Shiloh’s stirring the pot! He’s got control of Oscar’s ELQ shares, so Kim will have to deal with that blow. She may become fixated on how Shiloh duped her son before his death.

Many GH fans expect Shiloh will die at the end of his arc. Certain soap characters can pass the point of no return when it comes to redemption. Most people don’t want to see Shiloh turn his life around; they just want to see him pay. Could Kim become obsessed with making Shiloh pay, too? She might trade her baby obsession for a vengeful mission.

General Hospital spoilers say Kim will continue to have a hard time, so it’s possible she’ll spiral out of control again. Will Kim try to kill Shiloh? Even if she doesn’t succeed, it could lead to big trouble. Then again, GH could just have Kim decide she needs more than popping in for a session here and there. That doesn’t seem like it’s going to cut it, so Kim may need more intense therapy somewhere.

Whether it’s a forced move or a voluntary one, will Kim land at a mental health facility? The recent writing for Kim doesn’t suggest longevity on the show. General Hospital is making things look awfully bleak, so Kim may need to get away from all the Oscar memories and heal her mind.

Do you think Kim’s exit is in the works? Will GH get rid of Kim thanks to recent returns and other looming comebacks? If they wanted to free up some money, Kim could be an option. Now that Oscar’s gone, she doesn’t have much going on other than losing her grip on reality. Do you think Kim will be staying on in Port Charles for the long term?