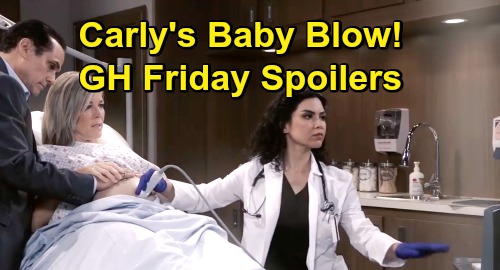 General Hospital (GH) spoilers for Friday, July 26, tease that some surprises are in store. Since Wednesday’s episode was preempted for testimony coverage, that episode will move to Thursday in the U.S. while Canada gets an encore. However, we’ve also got a hot preview of Friday’s action, so let’s dive in.

GH fans can expect Carly Corinthos (Laura Wright) to get some baby updates. It looks like she’ll learn the severity of her baby’s spina bifida with Sonny Corinthos (Maurice Benard) by her side. Carly will also bump into Jasper “Jax” Jacks (Ingo Rademacher) a little later. He’ll take a break from Valentin Cassadine (James Patrick Stuart) scheming and try to be there for Carly.

Nelle Benson (Chloe Lanier) will also stir the pot again on Friday. General Hospital spoilers say Michael Corinthos (Chad Duell) will agree to meet with Nelle at Pentonville – although he won’t be happy about it. Michael will just want to get this over with, but Nelle will cry and insist she knows something Michael doesn’t know about what really happened to their son.

General Hospital spoilers say Nelle and Michael’s chat will continue into next week, July 29 to August 2. Nelle will make a veiled comment soon that leaves Michael a bit puzzled. She won’t tell him Jonah Corinthos is alive and well, but she’ll give him a strange hint that could come in handy later.

Over with Elizabeth Webber (Rebecca Herbst) and Franco Baldwin (Roger Howarth), they’ll pitch in on something. This might involve the investigation into Liesl Obrecht’s (Kathleen Gati) case or it could involve supporting Cameron Webber (William Lipton). General Hospital spoilers say Cam will face more struggles due to the loss of Oscar Nero Quartermaine (Garren Stitt) before long.

Nina Reeves (Cynthia Watros) will also have some terrible news to pass along. There may be some snag at Crimson…or this could just be terrible news to Valentin! He won’t be happy to learn Jax is coming over for dinner at Wyndemere. It looks like she’ll also reach out to Willow Tait (Katelyn MacMullen) again and do her best to patch things up.

Willow was reluctant to hear Nina Reeves (Cynthia Watros) out recently, but she should be more open to an apology this time around. Nina feels guilty for blowing up all the Shiloh drama, but Willow’s got a kind heart. She knows Nina didn’t understand the full circumstances, so they should put this issue behind them.

Will Willow and Nina be able to keep the peace? If Willow turns out to be Nina’s biological daughter, that could bring more bombshells to work through. Meanwhile, General Hospital spoilers say Ava Jerome (Maura West) will battle some inner demons with the help of a new psychic. She’ll likely face more Kiki Jerome (Hayley Erin) problems, so stay tuned.

It sounds like some exciting scenes are ahead. We’ll keep you posted as other GH details emerge. Stick with the ABC soap and don’t forget to check CDL often for the latest General Hospital spoilers, updates and news.