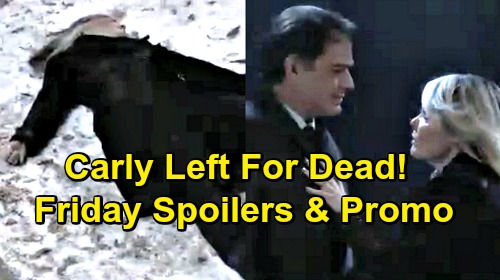 General Hospital (GH) spoilers for Friday, March 8, tease that Jason Morgan (Steve Burton) will come up empty. He just burst in the room Ryan Chamberlain (Jon Lindstrom) and Ava Jerome (Maura West) were staying in, but he’ll be too late. Once Jason determines that Ava and Ryan are gone, he’ll fill Laura Webber (Genie Francis) in.

Jason will tell Laura that Ryan must be headed to Canada with Ava. They’ll dash off to the footbridge and hope they can catch up with them. Meanwhile, Ava will do her best to talk some sense into “Dr. Kevin Collins.” She believes “Kevin” is having a breakdown, but she’s not sure exactly how to handle it. Ava doesn’t want to put herself in danger, but she can’t just let Carly Corinthos (Laura Wright) die.

Ryan dumped Carly’s unconscious body somewhere, but Ava will suggest that she can still call 911. She’ll beg “Kevin” to let her make this right. Of course, “Kevin” won’t be on board with that plan. He should be concerned when he realizes Ava views what he did to Carly as a mistake.

General Hospital spoilers state that an armed Jason will eventually show up with Laura. They’ll expose Ryan’s identity to Ava, so things are about to get crazy. Within the next episode or two, it looks like Ryan will throw himself off the bridge with Ava. GH fans won’t want to miss all the excitement.

Until then, Maxie Jones (Kirsten Storms) will point out that Peter August (Wes Ramsey) is awfully agreeable. She’ll wonder if he ever says no! Peter may note that he does, but it’s tough when Maxie’s the one making the requests. He’d do just about anything for her.

Elsewhere, Kristina Corinthos-Davis (Lexi Ainsworth) will give Sam McCall (Kelly Monaco) advice. She’ll ask if Sam really wants to go back to her old way of life, but she’ll think she knows the answer. Despite Kristina’s jealousy, it seems she’ll try to keep the Dawn of Day tenets. Kristina wants to impress Shiloh Archer (Coby Ryan McLaughlin), so she’ll encourage Sam to stay on the right path.

Kristina will also learn about Sam’s chat with Daisy Kwan (Kelsey Wang). Sam may fish for info about Daisy’s tattoo, but Kristina probably won’t know anything. She’s too wrapped up with Shiloh to pay much attention to Daisy these days.

Over with Alexis Davis (Nancy Lee Grahn), she’ll get a visit from Julian Jerome (William deVry). He should be worried about Dr. Kim Nero (Tamara Braun), so Alexis may have to serve as his sympathetic ear. Next, Valentin Cassadine (James Patrick Stuart) will reassure Sasha Gilmore (Sofia Mattsson). He’ll insist that they’re giving Nina Reeves (Michelle Stafford) something she wants above all else.

Nina always wanted a child and now she’s got one…sort of. Valentin won’t think it makes a difference that Sasha is a phony. Nina’s got the mother-daughter bond she was craving, which is all that matters. Sasha will look a little less nervous than usual, so she may start to buy that idea. However, it won’t be long until the boat is rocked and Sasha’s worried all over again.