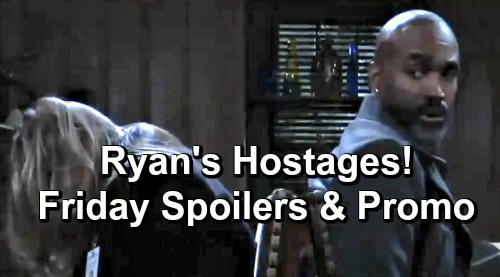 General Hospital (GH) spoilers for Friday, May 17, tease that it’ll be a big night in Port Charles, especially for Lucy Coe (Lynn Herring). She’ll chat with Maxie Jones (Kirsten Storms) before PC’s hottest event gets underway. Let’s the Nurses Ball begin! Lucy will hit the red carpet along with all the attendees, but Ava Jerome’s (Maura West) arrival just might turn the most heads.

That’s because of the date Ava will have on her arm. She’ll take Dr. Kevin Collins (Jon Lindstrom) to the shindig, so that’ll bring disapproval from a few familiar faces. As for Lucy, she’ll do some scheming with Scott Baldwin (Kin Shriner) in Friday’s episode. They’ll have some fun tricks up their sleeve, so it should be an entertaining evening in Port Charles.

Of course, Ava and Kevin will just hope their plan pays off. They’ll believe Ryan is on his way back to Port Charles, which should be both satisfying and terrifying. It’s what they want, but the man is still a vicious serial killer. The plot to draw Ryan out of hiding is incredibly risky, but Ava will count on a huge payoff.

In Canada, Curtis Ashford (Donnell Turner) will be tied up along with Laura Webber (Genie Francis). It looks like Laura will awaken after being knocked out. Curtis will quickly inform her that they’ve got trouble, but they’ll do their best to handle the drama.

Ryan normally would’ve just killed the intruders in a situation like this, so there are a couple of options here. The first is that Ryan wants them as live hostages and leverage. The second is that Ryan wasn’t the one who attacked them. It’s possible Ryan had another accomplice who helped him out, which could mean he’s indeed already headed back to PC like Ava believes.

Over with Jasper “Jax” Jacks (Ingo Rademacher), it seems he may do some flirting at the Nurses Ball. Jax will ask if someone would settle for Champagne as he extends a glass. Next, Elizabeth Baldwin (Rebecca Herbst) will kick off the festivities with Franco Baldwin (Roger Howarth). She’ll insist it’s going to be a good night before giving Franco a kiss.

Some surprises are in store for “Friz” at this event, so stay tuned to see what Franco does for his love. Meanwhile, Nina Reeves (Michelle Stafford) will be ecstatic over Sasha Gilmore’s (Sofia Mattsson) date. Sasha and Michael Corinthos (Chad Duell) should be quite the dapper duo, but Sasha will continue to worry about her fake daughter secret.

Elsewhere, Sam McCall (Kelly Monaco) will wonder if Shiloh Archer (Coby Ryan McLaughlin) is sure about this. They’ll be all dressed up and ready for the party, but Sam will sense some hesitation on Shiloh’s part. This isn’t really Shiloh’s scene, but he’ll assure Sam he’s still in. Shiloh wants to use every opportunity he can to draw Sam closer.

Other General Hospital spoilers say Harrison Chase (Josh Swickard) will have a brilliant idea. He’ll shock Willow Tait (Katelyn MacMullen) with his suggestion, but he may face an immediate rejection. Chase might push Willow to perform with him, but she won’t be on board with that plan.

However, a GH sneak peek reveals that Chase will drag Willow on stage anyway. She’ll end up having a great time, but this move won’t go over well with Shiloh. General Hospital fans won’t want to miss Chase and Willow’s cute performance next week.

For now, Sonny Corinthos (Maurice Benard) will seek a decision from Carly Corinthos (Laura Wright). He’ll want to know if they’re staying or going, so they may be on fence about all the Nurses Ball hoopla. Since Sonny will announce something later, it sounds like they’ll attend as planned.

Speaking of that announcement, it could involve a gender reveal. Carly and Sonny just learned whether they’re having a boy or a girl, so GH viewers should find out soon! We’ll give you updates as other news comes in. Stick with the ABC soap and don’t forget to check CDL often for the latest General Hospital spoilers, updates and news.