General Hospital Spoilers: New GH Characters Coming to PC – Jordan Gains a Family When She Needs Them Most? 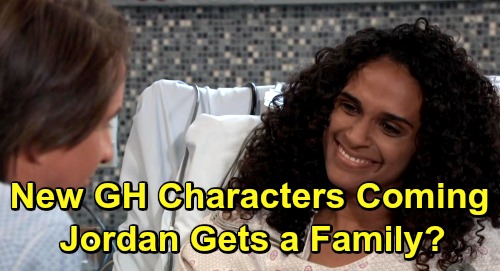 General Hospital (GH) spoilers tease that Jordan Ashford (Briana Nicole Henry) remain stuck in a crisis. She’s in desperate need of a kidney, but her only match so far can’t donate to her. Will Jordan gain a family to save her life?

When a soap character’s family is mentioned, it usually means someone from that family is about to show up. With Jordan needing a kidney transplant, GH has the perfect way to write one or more relatives in. Jordan’s recent conversation with T.J. Ashford (Tajh Bellow) may have been foreshadowing this possibility.

Dr. Kevin Collins (Jon Lindstrom) can’t donate because of his prediabetic condition, and Ryan Chamberlain (Jon Lindstrom) is still missing. Ryan could eventually be killed and donate a kidney to Jordan, but that’s not the only option to consider. Even if a family member surfaces and learns he or she’s not a match, General Hospital left the door open.

Jordan doesn’t want to give anyone info on her family. However, T.J. is a medical student and Curtis Ashford (Donnell Turner) is a P.I. Between the two of them, they could locate Jordan’s family without her help and find a possible donor. Since Jordan could die without the transplant, will T.J. and Curtis take matters into their own hands?

GH buzz hints that we could have up to four new characters. Who could they be? Hayden Barnes (Rebecca Budig) is returning, so it’s safe to say one of those characters will be the child she shares with Dr. Hamilton Finn (Michael Easton). Ryan’s accomplice recently appeared, so she could be considered another one.

What about the others? We don’t need any more Quartermaines coming out of the woodwork. That’s for sure! However, we do need a donor for Jordan unless they’re going to kill her character off, which there’s no indication of. Will an estranged family member or two reunite with Jordan? Will someone from her past save her life or at least be willing to try?