General Hospital Spoilers: Comings and Goings – Kelsey Wang Back as Daisy, Sam Gets a Shock – Two Fan Faves Back on Screen 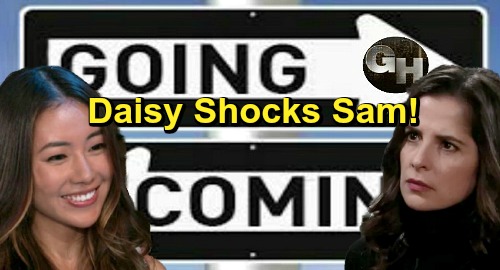 General Hospital (GH) spoilers reveal that we’ve got some comings and goings news to pass along. For starters, two familiar faces will be back on screen this week. GH fans don’t see much of Mac Scorpio (John J. York) and Felicia Scorpio (Kristina Wagner) these days. Thankfully, they’ll return as the serial killer drama revs up.

Felicia really needs to be included since she was Ryan Chamberlain’s (Jon Lindstrom) previous obsession. Of course, Ryan has shifted his attention to Ava Jerome (Maura West). He’s completely infatuated by Ava and she’s loving every second of it. Ava can barely believe that this kind of love is possible, which is going to make it even more heartbreaking when the truth is revealed.

However, we’ve got to make it to that truth first. Felicia and Mac will pitch in on that as they consider a theory on February 28. They’ll speculate on the murderer in Port Charles, which the public believes is Franco Baldwin (Roger Howarth) thanks to his guilty plea. Perhaps Mac and Felicia won’t be so sure about that. They may think Franco’s working an angle that could catch the actual killer.

Other General Hospital spoilers say Sam McCall (Kelly Monaco) will get a startling visit on a new GH episode during the week of March 4-8. It looks like that’ll be Daisy Kwan (Kelsey Wang), but what will she want? It’s possible Daisy will keep pushing the lie she’s apparently selling for Shiloh Archer (Coby Ryan McLaughlin). He may even send her to Sam and push her to make amends for what she did.

In reality, it seems Shiloh threatened or manipulated Daisy into taking the blame. With that in mind, maybe this visit will actually be about the real story. Will Daisy seek out Sam to let her know Shiloh was behind the emails and obituary? Will Daisy confess that she was too scared to say no to Shiloh? Those sound like good options as this hot plot gets even hotter.

General Hospital spoilers state that Sam will fear for worst for Kristina Corinthos-Davis (Lexi Ainsworth). She’ll realize Dawn of Day could be sucking her sister down a dangerous hole. That’s it for comings and goings. We’ll give you updates as other GH details emerge. Stay tuned to the ABC soap and don’t forget to check CDL often for the latest General Hospital spoilers, updates and news.