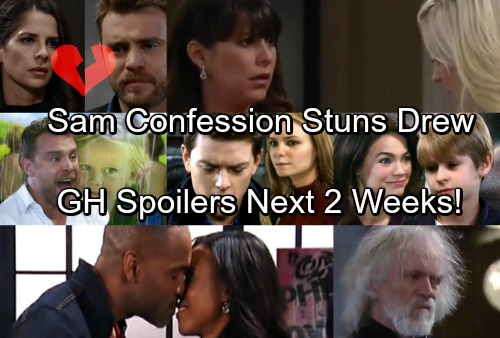 General Hospital (GH) spoilers for the next two weeks tease that Port Charles will face more pandemonium thanks to Faison (Anders Hove). The week of January 29-February 2 will bring some tense moments at GH. Maxie (Kirsten Storms) will experience the joy of relief and eventually, the crushing sadness of a goodbye.

It looks like Nathan (Ryan Paevey) will initially improve after being shot in the chest. However, he won’t survive for long. General Hospital spoilers say Nathan’s stunning death will rock PC to the core. It may be the real deal or there could be some deception involved. Either way, Nathan’s loved ones will be convinced that he’s a goner. GH fans will certainly hate to see Nathan depart!

On a happier note, Curtis (Donnell Turner) will have a surprise in store for Jordan (Vinessa Antoine). We could all use some romance mixed in with the doom and gloom. Maybe Jordan and Curtis will find a little peace during the chaos.

Other General Hospital spoilers say Valentin (James Patrick Stuart) will show his softer side. Once Lulu (Emme Rylan) narrowly escapes death, Valentin may show her some kindness. There was a time when Valentin would’ve loved to see Lulu dead, but Charlotte (Scarlett Fernandez) has bonded with her now. A small part of Valentin has come to care about Lulu, even if it’s mostly for the sake of his child.

Across town, Drew (Billy Miller) will seethe. He’ll plan on blasting Jason (Steve Burton) for excluding him from the Faison plot. Meanwhile, Jason and Faison’s drama will end with a shocker. Unfortunately, Jason may not get the exact outcome he wants!

The week of February 5-9 will deliver a serious confession. GH fans can expect Sam (Kelly Monaco) to come clean. She kissed Jason on New Year’s Eve kiss, so it may be time to fill Drew in. Once Drew’s in the loop, he’ll struggle to move past it. Sam and Jason’s bond will cause real issues for her new marriage.

Other General Hospital spoilers say Robin (Kimberly McCullough) will return to Port Charles. She’ll tackle some regrets during her latest stint. Maybe this will involve Robin’s treatment of Drew during her last trip to town. Robin didn’t really do anything wrong, but it wouldn’t hurt to clear the air.

At some point, Robin will also be there for Anna (Finola Hughes). Since Heinrik is most likely Anna’s son, that’ll be a lot to deal with. Valentin will drop a bomb on Anna sooner or later, so maybe he knows a thing or two about Heinrik. Despite Peter’s (Wes Ramsey) attempts to hide the truth, he seems to be the son of Faison and the traitor.

It sounds like some great drama’s in the works. We’ll give you updates as other GH news comes in. Stay tuned to the ABC soap and don’t forget to check CDL often for the latest General Hospital spoilers, updates and news.