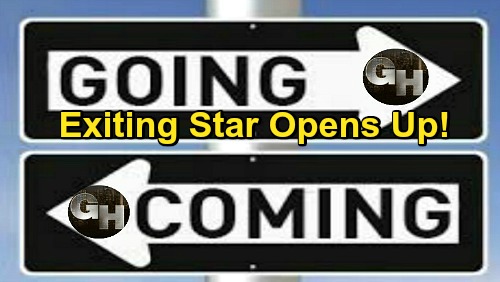 General Hospital (GH) spoilers reveal that we’ve got some comings and goings to pass along. For starters, let’s talk about a recent exit. Time Winters wrapped up his short stint as Dr. Arthur Cabot, the doc connected to the mystery virus. It’s clear that he hasn’t revealed everything he knows just yet, so don’t expect this exit to stick. Dr. Cabot will pop up again for another exciting chapter down the road.

In other GH news, Kelsey Wang will reprise her role as Daisy Kwan on this week’s new GH episodes, March 4-8. General Hospital spoilers say Daisy will have a crucial chat with Sam McCall (Kelly Monaco). It’s not clear if Sam will contact Daisy or Daisy will contact Sam, but some shockers are looming either way. Will Sam get Daisy to admit that Shiloh Archer (Coby Ryan McLaughlin) pressured her to confess?

Daisy took the blame for sending the obituary to Sam along with the emails. However, Sam just isn’t buying it. She may push until Daisy cracks – or Daisy could even seek out Sam to share the real truth. Either way, General Hospital spoilers state that Sam will worry about Kristina Corinthos-Davis (Lexi Ainsworth) even more after this. She’ll track down her little sis to offer a stern warning.

Brytni Sarpy is another actress we can add to goings. Since she scored a contract role with The Young and the Restless, Sarpy had to bail as Valerie Spencer on GH. Her last airdate was February 14, so Valerie will just drop off the map for now. General Hospital may throw in a quick comment to explain later. A recast is always an option, so we’ll keep an eye on the situation for you.

Of course, this is certainly exciting news for Sarpy. In an interview with Soap Opera Digest, Sarpy talked about daytime drama hopping and what the transition was like. “I thought I would have a lot of nerves, but I think because it was such a familiar world to me, and for the most part, things are the same but different with how the environment is, it was a nice experience.”

GH viewers wish Sarpy the best of luck in her new role as Y&R’s Elena Dawson! That’s it for comings and goings. We’ll give you updates as other details emerge. Stay tuned to the ABC soap and don’t forget to check CDL often for the latest General Hospital spoilers, updates and news.