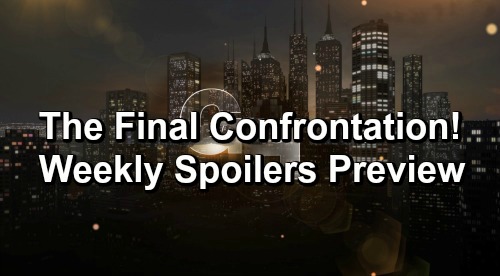 General Hospital (GH) spoilers preview for the week of March 4-8 tease that some shocking moments are coming up. First, Curtis Ashford (Donnell Turner) will listen to a significant voicemail. It seems he’ll check Jordan Ashford’s (Briana Nicole Henry) messages and hear what Franco Baldwin (Roger Howarth) had to say. Franco revealed Ryan Chamberlain (Jon Lindstrom) as the killer, so Curtis will learn the truth.

Over with Laura Webber (Genie Francis) and Dr. Kevin Collins (Jon Lindstrom), they’ll discuss their getaway plan. Kevin and Laura will discover a secret passageway that could help them escape, but Kevin will feel like he’s slowing Laura down. He’s blind, so that makes a difference. Kevin will encourage Laura to go ahead of him and let him catch up when he can.

Elsewhere, Kristina Corinthos-Davis (Lexi Ainsworth) will get some long-awaited attention. It sounds like Shiloh Archer (Coby Ryan McLaughlin) will dote on her a bit, which she’ll love since she’s been jealous of Sam McCall (Kelly Monaco). However, Shiloh obviously has a creepy agenda that’ll spell trouble.

Meanwhile, Ryan Chamberlain (Jon Lindstrom) will stuff Carly Corinthos (Laura Wright) in the trunk of his car and head off to elope with Ava Jerome (Maura West). Their destination will be Niagara Falls as well, so these storylines should connect somehow. GH viewers won’t want to miss all the road trip chaos that should lead to a final confrontation with Ryan!

Back in Port Charles, Lulu Falconeri’s (Emme Falconeri) true memories will come rushing back. She’ll finally makes sense of everything that’s been jumbled in her brain. Jason Morgan (Steve Burton) will also discover that Carly’s facing peril, but he’ll be too late to stop it. He’ll have to come up with a new strategy to help his bestie.

Next, GH spoilers state that Sam will fear for Kristina. After a chat with Daisy Kwan (Kelsey Wang), Sam will fill Kristina in on her concerns and offer a warning. Sonny Corinthos (Maurice Benard) will also get a message that’s rather ominous. Will it be about Carly or will this involve his search for Dante Falconeri (Dominic Zamprogna)? Either way, Sonny will be worried about whatever he hears.