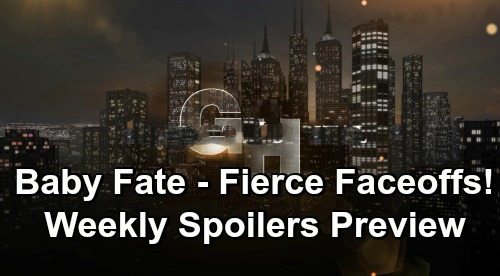 General Hospital (GH) spoilers for the week of March 11-15 tease that some stunning moments are on the way. First, Jason Morgan (Steve Burton) will display fierce determination. After Ava Jerome (Maura West) tumbles off the footbridge with Ryan Chamberlain (Jon Lindstrom), it looks like Jason will save the day. After Ava’s safe, it’ll be Carly Corinthos’ (Laura Wright) turn to receive Jason’s help.

Thankfully, Carly will still be alive when Jason discovers her. She’ll be rushed to the hospital for treatment, but what about her unborn child? General Hospital spoilers state that Carly will eventually learn the fate of her baby, so stay tuned for the big news.

Over with Elizabeth Webber (Rebecca Herbst), she’ll battle concerns about her marriage to Franco Baldwin (Roger Howarth). Liz was relieved to learn Franco wasn’t behind the latest murders. She’s thrilled he’s going to be OK after that brutal stabbing as well. However, Liz will still find it difficult to move past Franco’s secrets.

Jordan Ashford (Briana Nicole Henry) insisted that Franco couldn’t tell anyone about their plan – not even Liz. He really struggled with it, but Liz may feel like he should’ve put his foot down. Liz deserved to know what was up. Franco will face a crushing blow soon, so there’s a chance Liz may want their marriage annulled. She may not be ready for that commitment after Franco’s lies.

Meanwhile, Brad Cooper (Parry Shen) will bicker with Willow Tait (Katelyn MacMullen). This is a terrible idea since Brad’s keeping a baby swap under wraps, but he’ll let the tension explode anyway. Speaking of tension, we’ll see more of it for Sasha Gilmore (Sofia Mattsson) and Valentin Cassadine (James Patrick Stuart). There’ll be new concerns as a threat emerges to their fake daughter scheme.

Sasha will offer Valentin a warning this week, so that’ll probably tie in with Peter August (Wes Ramsey) and Maxie Jones (Kirsten Storms). They’ll inch closer to the truth about Sasha, so she should be on edge. Nina Reeves (Michelle Stafford) would be devastated if she knew the real story, but Valentin will reman convinced they can keep it quiet.

Next, Dr. Kim Nero (Tamara Braun) will reject Shiloh Archer’s (Coby Ryan McLaughlin) help. He’ll want to pitch in after Oscar Nero’s (Garren Stitt) recent ordeal, but Kim will think they’re doing just fine without him. T.J. Ashford (Tajh Bellow) will also hope to assist Jordan in the week ahead. He may want to donate a kidney, which could be why GH spoilers say Molly Lansing-Davis (Haley Pullos) will fret.

Other General Hospital spoilers say Anna Devane (Finola Hughes) will get a special visitor. It seems that’ll be Andre Maddox (Anthony Montgomery), who’ll confirm Anna indeed has some memories that belong to her sister. Alex Devane Marick (Finola Hughes) is actually Peter’s mother, so that shocker should hit Anna down the road.

General Hospital fans won’t want to miss all the action. We’ll give you updates as other GH details emerge. Stick with the ABC soap and don’t forget to check CDL often for the latest General Hospital spoilers, updates and news.