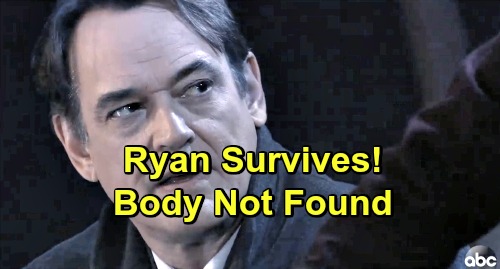 General Hospital (GH) spoilers tease that Ryan Chamberlain (Jon Lindstrom) may cheat death once again! GH recently released a new promo called “The End of Ryan,” which shows Jason Morgan (Steve Burton) standing at the end of a bridge. He’s got a gun aimed at the killer, who’s right next to Ava Jerome (Maura West).

The video doesn’t make it clear if Ryan gets shot or not, but it looks like he pulls Ava over the edge of the bridge with him and into the water below. Ryan apparently intends to make this a murder-suicide, but perhaps a twist of fate is brewing. Could Ryan’s exit involve another presumed death and preserve the possibility of a comeback?

Let’s consider one of Jon Lindstrom’s tweets from earlier this week. “Now we’re getting to the REALLY fun stuff,” Lindstrom said. “All good things must end…or do they?” That could be Lindstrom’s way of hinting at an open ending.

Lindstrom has had a blast portraying Ryan for this lengthy arc, so he’d undoubtedly be on board for another round of it at some point. It’s an exciting role for an amazing actor and the fans he entertains. Many General Hospital viewers are rooting for Lindstrom to get a Daytime Emmy for his incredible work.

If it doesn’t happen this year, there’s always next year. We’d just like to see Lindstrom’s talent get recognized! It might also be nice to leave the door open for more Ryan drama. Lindstrom’s tweet could be a big clue about Ryan’s survival.

If Ryan avoids drowning and resurfaces eventually, perhaps GH wouldn’t wait so long to resurrect him this time. What if Port Charles believes the nightmare is over before Ryan pops up for one final act of vengeance? Then again, the show may save Ryan’s return for years down the road when they need to kill off a few characters!

Regardless, General Hospital spoilers say some shocking moments are ahead thanks to Ryan and the darkness within him. Do you think Ryan will make it out of this mess alive? Will he cheat death once more? We’ll give you updates as other GH news comes in. Stay tuned to the ABC soap and don’t forget to check CDL often for the latest General Hospital spoilers, updates and news.

Now we’re getting to the REALLY fun stuff. All good things must end…or do they? @GeneralHospital #gh #gh55 #thetwinning #kevinryan #generalhospital https://t.co/i2AOvEDm8B