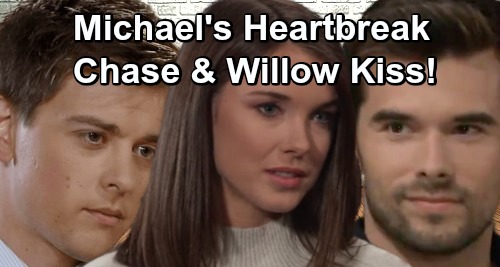 General Hospital (GH) spoilers tease that Chase (Josh Swickard) will convince Willow (Katelyn MacMullen) to go on another date with him. He feels a real spark and although her interest doesn’t quite seem to match up, she still likes him. Chase is doing everything he can to win Willow over, so it won’t be long until she’s falling hard, too.

However, we can’t forget about Willow’s bond with Michael (Chad Duell). He was bummed when he realized Chase had already asked Willow out. Michael was clearly hoping to make a move of his own, but that plan took a backseat thanks to Chase.

Since Michael and Willow are still attending bereavement group meetings together, their friendship will remain intact. Michael may be OK with that for a while, but his growing feelings could be a problem. As for Chase, he’ll be on cloud nine over the way things are going. Chase will find himself completely infatuated, so he’ll be thrilled when Willow spends New Year’s Eve with him.

General Hospital spoilers say a big party will get underway, which will bring plenty of warm moments. That goes for several other GH pairings as well. Love will be in the air as the clock strikes midnight, so expect some steamy kisses all around. Chase and Willow will get in on the lip lock action, which will leave Chase even more obsessed than before. He’ll definitely see a real future with Willow.

Michael will be saddened as Chase and Willow heat up their romance, but he shouldn’t throw in the towel. It’s not like Chase and Willow are married – although Chase is probably secretly fantasizing about that based on his behavior. It’s been a long drought for this thirsty detective, so who can blame him for going all in on this?

Since Willow is Wiley’s birth mom, she’ll get tangled up in that storyline and all the revelations that’ll come out of it. Michael is Jonah’s father and Jonah happens to be Wiley’s replacement. As Willow inadvertently helps Michael solve the mystery, General Hospital will strengthen their connection.