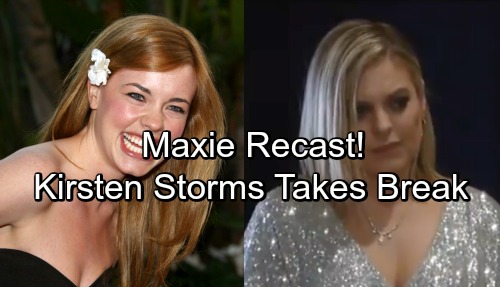 General Hospital (GH) spoilers reveal that Maxie (Kirsten Storms) will be sporting a different look than usual soon. Earlier buzz pointed to Storms taking time off from the show, but it turns out her break was only for two days. Storms was sick with the flu, so GH had to call in a temporary recast for a couple episodes.

According to Soap Opera Digest, Molly Burnett was once again tapped to fill in for Storms. General Hospital fans may recall that Burnett stepped up to play Maxie in July 2016. Temporary recasts are always a bit jarring, but Burnett managed to pull off the part. She should do just fine during her next stint.

Burnett should also be familiar to Days of Our Lives watchers. She used to play Melanie on the NBC soap, so she knows her way around a daytime drama. General Hospital spoilers say some hot drama’s about to hit Port Charles and Maxie needed to be around for it. That’s why Burnett was happy to help out.

You can catch Burnett as Maxie on June 1 as well as June 4. After that, Storms will be right back where she belongs. She recently signed a new contract, so she’ll be sticking around and giving us plenty of Maxie scenes. This is certainly great news for her fans!

General Hospital spoilers say Maxie has some big storylines in the works. After the birth of her baby, things could get tricky. Nelle’s (Chloe Lanier) set to have her kid soon as well, so there’s always the potential for a switch. Of course, Maxie will also face heartache over Peter (Wes Ramsey). His deception will leave her crushed and furious, so expect some tense moments.

On the bright side, Maxie and Lulu (Emme Rylan) will patch things up soon. They’ll bond over getting duped by Heinrik, so at least something positive will come out of all this. Are you ready for more Maxie mayhem? We’ll give you updates as other GH details emerge. Stay tuned to the ABC soap and don’t forget to check CDL often for the latest General Hospital spoilers, updates and news.