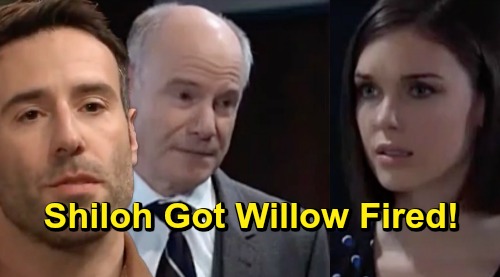 General Hospital (GH) spoilers tease that Willow Tait (Katelyn MacMullen) will have to wrap her head around a shocker. She’s certainly battled problems on the job, but those have mostly been due to bratty kids and an overbearing almost stepmother. Nina Reeves (Michelle Stafford) and Valentin Cassadine (James Patrick Stuart) wanted Willow fired, but the principal stood by Ms. Tait…until now.

In Tuesday’s episode, May 14, Willow faced criticism over a book she pushed for in the library, which included gay characters. Nina sort of defended Willow in a backhanded way. She made it clear that Willow handled the situation wrong, but she suggested the book choice was fine. Nina argued against censorship, but Bianca’s parents obviously weren’t too happy about it.

After the parent-teacher meeting wrapped up, the principal stunned Willow by announcing she wouldn’t be asked back in the fall. General Hospital probably wants us to believe the parent criticism and the firing are connected. However, there’s a good chance that’s not true. Willow’s not going to get a fired over a book that wasn’t even assigned. It’s not like she was forcing Bianca to read it.

Furthermore, we’ve established that Nina and Valentin’s efforts didn’t pan out. GH fans know Valentin is a powerful man with plenty of money to throw around. If he couldn’t get Willow fired, who could? We’re going to bet this is the next example of Shiloh Archer’s (Coby Ryan McLaughlin) wide reach.

There are still hot May sweeps bombshells left to play out. General Hospital spoilers say Shiloh’s power runs deeper than anyone thought. We also know Shiloh’s actions will affect Willow’s relationship with Harrison Chase (Josh Swickard). It makes perfect sense for Shiloh to have Willow fired as a show of control. He’s probably hoping this powerplay will drive Willow back to teach at Dawn of Day.

Shiloh could easily have DoD dirt on many board of education members. Willow could end up blacklisted in all the area schools. That could force Willow to contemplate moving, which would definitely affect her romance with Chase.

Bottom line, having Willow fired is likely Shiloh’s warning. It’s a way to show he’s in charge and will do whatever it takes if Willow keeps testing him. Willow’s sure to be both furious and fearful if Shiloh’s behind this as we suspect.