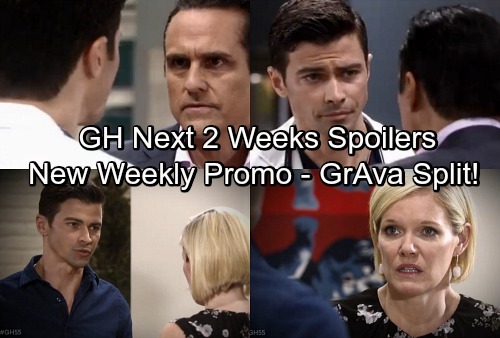 General Hospital (GH) spoilers for the next two weeks tease that some surprises are in store. The week of April 30-May 4 will leave Curtis (Donnell Turner) with a lot on his mind. The spot on Jordan’s (Vinessa Antoine) lung prompted a cancer scare and an impromptu proposal. Curtis tried to stand by his offer of marriage after Jordan got good news, but she tabled the idea for now.

However, Curtis truly wants to marry Jordan and he’ll take steps toward that goal. General Hospital spoilers say Curtis will seek TJ’s (Tequan Richmond) approval this week. Perhaps he’ll ask for TJ’s blessing and gush about plans for a real proposal this time. It might be more effective with a ring and no cancer fears pushing Curtis into it.

Elsewhere, Griffin (Matt Cohen) and Ava (Maura West) will have a heated argument. The custody situation has already been causing tension between them, so that may build into a relationship explosion. General Hospital spoilers say these two will definitely have major issues to tackle.

Over with Chase (Josh Swickard), he’ll do what his half-brother wants. Finn (Michael Easton) hasn’t been too keen on reconnecting with him, so Chase may try to back off. GH fans can expect them to bond sooner or later, but Finn may be the one who has to reach out.

The week of May 7-11 will bring some special moments for Jason (Steve Burton). He missed out on so much with Jake (Hudson West) while he was gone, but he’ll do his best to form a relationship with him now. General Hospital spoilers state that some sweet scenes are coming up, so don’t miss them!

Across town, Nelle (Chloe Lanier) will put another plot in motion. She’ll make Ava her latest target, so a stunning setup’s brewing. Over with Lucas (Ryan Carnes), he’ll be suspicious about something. Perhaps more red flags will emerge in the adoption. There’s definitely something fishy going on and it’s possible Nelle’s involved. Her friendship with Brad (Parry Shen) seems awfully shady!

Other General Hospital spoilers say Carly (Laura Wright) will be on a mission. She’ll screw up with Josslyn (Eden McCoy), so she’ll scramble to repair the damage. It’s just one more thing for Carly to deal with right now. Between Nelle’s scheme and all of Sonny’s (Maurice Benard) drama, Carly’s already got too much on her plate. Tackling family issues will make things worse, but she’ll try to fix them anyway.

It sounds like the next two weeks will deliver plenty of excitement. We’ll give you updates as other GH details emerge. Stay tuned to the ABC soap and don’t forget to check CDL often for the latest General Hospital spoilers, updates and news.