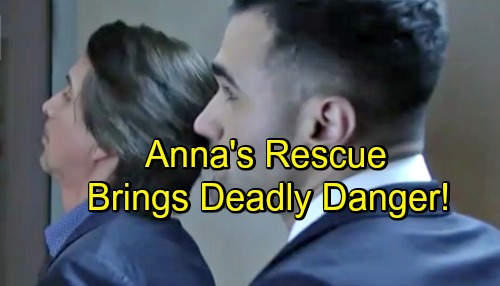 General Hospital (GH) spoilers tease that a dangerous mission will get underway. Robert (Tristan Rogers) helped Finn (Michael Easton) realize the truth about Anna (Finola Hughes). She’s been missing for a month, so the situation is quite dire.

Since the kidnapper posed as Anna and summoned Finn via text, Robert assumes they need him as leverage. There must be something Anna’s captor wants her to reveal. Robert wondered if Finn was willing to put his life on the line again for Anna’s sake. Of course, Finn’s in. He’d do anything to get Anna home safe and sound.

General Hospital spoilers say Robert will work on a new plan. He’ll put his spy skills to good use and hope they can outsmart Anna’s abductor. It sounds like Finn will serve as the bait. Robert will want the kidnapper to think he or she’s pulling this off, so that’ll bring major drama. Finn may walk into this trap intentionally with the goal of springing one of his own.

Of course, that’ll bring risks like Robert said. Finn could indeed land in harm’s way during this elaborate setup. There’s no confirmation on Anna’s kidnapper just yet, but this is obviously serious business. He or she’s working hard to score the necessary information, so who knows how far this scheme could go?

There’s a chance that this GH kidnapping plot will tie in with Peter (Wes Ramsey). If Robert’s right (and he usually is), this is about seeking secrets. That may rule out revenge or getting Anna out of the picture as a motive. This seems to be about Anna’s knowledge and what the kidnapper stands to gain from it.

Anna kept Peter a secret for decades, so she could be keeping a few more shockers under wraps. If her secret relates to Peter in some way, it could pull him into all this eventually. He might even get in on the rescue. If Peter somehow avoids doing time in the slammer and learns Anna’s protecting him somehow, it could spark some action.

Peter will never know Anna if she can’t be saved and deep down, he wouldn’t be OK with that. These two deserve a shot at forming a bond. However, Finn and Robert will tackle this as a duo for now. General Hospital spoilers say they’ll land in danger soon, so stay tuned for some exciting scenes.

Are you anxious to see Robert and Finn’s adventure? Can they save Anna and avoid injury? Will they find themselves in deep trouble? We’ll give you updates as other news comes in. Stick with the ABC soap and don’t forget to check CDL often for the latest General Hospital spoilers, updates and news.