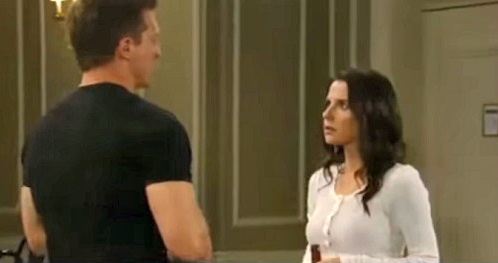 General Hospital (GH) spoilers tease that Sam (Kelly Monaco) and Jason (Steve Burton) will join forces to help Spinelli (Bradford Anderson). When they learn he’s been arrested, they’ll both leap into action. Jason and Sam will hope they can get Spinelli out of his jam ASAP.

However, doubts will creep in for Sam later. She’ll remember that the kids came along, so she’ll be worried about getting tangled up in trouble. Plus, this trip’s supposed to be about soul-searching. Sam won’t be sure about staying right by Jason’s side throughout the remainder of her getaway. She still hasn’t made her decision, so this will definitely bring more stress.

As Sam considers her future, a special visitor will catch her off guard. Who will visit Sam and what advice will he or she have to offer? Nothing’s been confirmed, but GH buzz suggests Curtis (Donnell Turner) might be the one who appears. It makes sense to let the Heinrik hunt collide with the Peter (Wes Ramsey) investigation. Those could be puzzle pieces for someone to put together later. 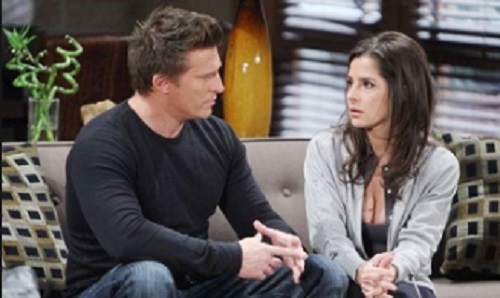 Of course, Curtis would undoubtedly voice his support for Drew (Billy Miller) again. He might bring up all the drama that’s been happening in Port Charles. The news has surely spread by now. Drew pumped a bullet in Jim (Greg Evigan) to save Franco’s (Roger Howarth) life, so Curtis may think his pal needs Sam more than ever.

Sam could be tempted to return to PC and support Drew, but this could also make her rethink a few things. She can’t really use the danger excuse anymore. Drew ends up in just as much peril as Jason if not more. He barely survived the earthquake, which was caused by Jim. Next, Jim nearly killed Drew by burying him in cement.

Drew later saved Franco, but that General Hospital showdown could’ve gone horribly wrong. He had no way of knowing what he was walking into. All of that danger stems from Drew’s past, not Jason’s. It could level the playing field a bit if Sam realizes Drew’s not the safe option she thought he was. Sam will be free to choose based on love alone.

General Hospital spoilers state that Sam will remain torn for a little longer, but her big decision’s coming up by the end of this trip. It certainly looks like Jason will be the man she picks – at least for right now. We’ll give you updates as other GH details emerge. Stay tuned to the ABC soap and don’t forget to check CDL often for the latest General Hospital spoilers, updates and news.