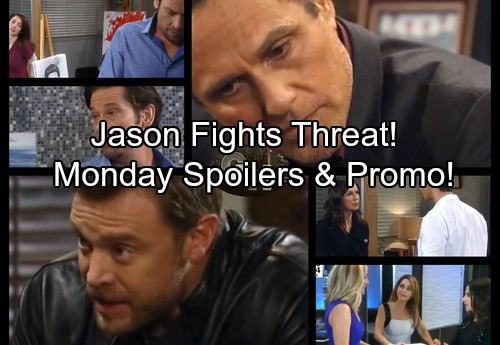 General Hospital (GH) spoilers for Monday, October 23, tease that Jason (Billy Miller) will grow increasingly concerned about his family’s safety. Sonny (Maurice Benard) won’t think Jason should worry. He’ll argue that this guy isn’t a real threat, but Jason will disagree. It’s clear that Jason intends to put a stop to all this, but that should make life even more difficult for Patient Six (Steve Burton).

Meanwhile, Sam (Kelly Monaco) will meet up with Carly (Laura Wright) and Olivia (Lisa LoCicero) for a chat. It looks like she’ll be trying to nail down some last-minute details for the upcoming party. When Carly senses that Sam’s stressed, she’ll urge her to relax and enjoy the moment. Carly will think this is going to be a great night, but that may not be the case at all!

At GH, Andre (Anthony Montgomery) will give Franco (Roger Howarth) helpful advice. Once Franco explains the situation he’s facing, Andre will ask some tough questions. He’ll try to get Franco to open up about how he really feels.

Since Franco learned he most likely pushed Drew down the stairs as a boy, he’s wondering just how messed up he is. Franco doesn’t want the darkness to control his life, but it could if he keeps letting his past haunt him. It appears Andre will encourage Franco to work through his issues with art.

General Hospital spoilers say Franco will give it a shot with some sketches and paintings. When Liz (Rebecca Herbst) wants to see what he’s working on, Franco will be reluctant to show her. His drawings obviously will involve Drew as well as his painful history.

Anna (Finola Hughes) will also take a minute to catch up with Griffin (Matt Cohen). She won’t be pleased when she hears his latest news. Griffin will admit he left the priesthood and is now seeing where things might go with Ava (Maura West). Anna will advise against it, but she’ll also have some news of her own to share.

General Hospital spoilers say Anna will wonder if Griffin’s heard gossip about her romance with Finn (Michael Easton). Griffin will be taken aback, but Anna will probably admit that this relationship isn’t what it seems. She may contend that she simply has to do whatever it takes to pull off her mission.

It sounds like Monday’s episode has a lot to offer! We’ll give you updates as other GH details emerge. Stay tuned to the ABC soap and don’t forget to check CDL often for the latest General Hospital spoilers, updates and news.