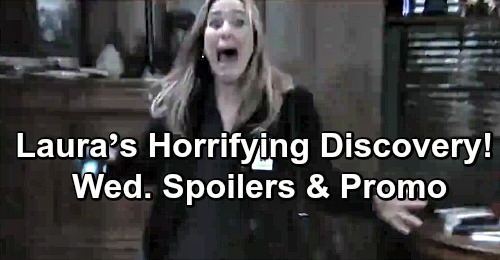 General Hospital (GH) spoilers for Wednesday, May 15, tease that Laura Webber (Genie Francis) and Curtis Ashford (Donnell Turner) will think they’re onto something. They met Ryan Chamberlain’s (Jon Lindstrom) apparent accomplice at that house in Canada, but they can’t confirm it yet. However, they do know this woman is exhibiting suspicious behavior and made some obviously bogus claims.

GH viewers know a bit more than that. We saw this woman tell someone she sent them away and call this person’s attention to the newspaper he wanted. Since the mystery person stabbed Dr. Kevin Collins’ (Jon Lindstrom) picture with a knife, this is clearly Ryan. Kevin and Ava Jerome’s (Maura West) plot is succeeding since Ryan is becoming so enraged.

Nevertheless, Curtis and Laura need real answers. On Wednesday, Curtis will note that “she’s” ready to talk. Will Ryan’s accomplice be willing to open up after all? She seemed terrified, so she’d be taking a huge risk here. Even so, she may feel this is the only way out of her current predicament.

At some point, Laura will get a major shock. It appears she’ll stumble across something quite gruesome, so will this be a “present” from Ryan? Could he kill his accomplice for trying to reach out? General Hospital fans know what Ryan’s capable of, so that’s definitely a possibility.

At GH, Jordan Ashford (Briana Nicole Henry) will get a visit from Stella Henry (Vernee Watson). As Dr. Hamilton Finn (Michael Easton) stands nearby, Jordan will declare that she’s not getting a transplant. She’ll accept this isn’t happening as soon as she needs it, but she’ll also realize her condition could head downhill fast.

Other General Hospital spoilers say Anna Devane (Finola Hughes) will let Robert Scorpio (Tristan Rogers) down gently. She overheard a conversation that caused a misunderstanding, so she’ll hope to clear things up for her ex. Anna will assure Robert that she’s sworn off marriage. She believes he’s about to propose, so this is how she’ll shut him down without hurting his feelings.

Of course, Anna would likely be open to Finn’s proposal, but Robert may make a wrong assumption based on this chat. This is a big mess and its only getting messier. That’ll be evident when Mike Corbin (Max Gail) takes the real ring and uses it to pop the question to Yvonne Godfrey (Janet Hubert).

Jason will insist that Sam’s committed to taking Shiloh down, so Carly will wonder how far Sam’s willing to go. Sam is prepared to take part in the initiation ceremony and secretly record the whole thing, so too far as far as Jason’s concerned! He’ll do his best to protect Sam, but he won’t like what Sam’s subjecting herself to.

Across town, Shiloh will be eager to complete Sam’s initiation. He’ll suggest doing it at the house tonight, but Sam will talk him into delaying it. General Hospital spoilers say Sam will conceal her agenda and hope she can keep stringing Shiloh along.

It sounds like some great scenes are coming up. We’ll keep you posted as other GH news emerges. Stay tuned to the ABC soap and don’t forget to check CDL often for the latest General Hospital spoilers, updates and news.