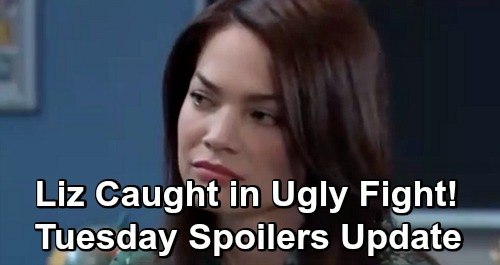 General Hospital (GH) spoilers update for Tuesday, May 14, tease that Robert Scorpio (Tristan Rogers) will have a stunning realization. He’ll figure out that he’s misplaced Dr. Hamilton Finn’s (Michael Easton) engagement ring, which is a real problem since Finn wants it back ASAP. Robert will fill Felicia Scorpio (Kristina Wagner) and Mac Scorpio (John J. York) in on his dilemma, so they’ll quickly get involved.

For starters, Felicia will play shrink and suggest Robert subconsciously wanted to lose the ring. She’ll think he may still be in love with Anna Devane (Finola Hughes), but Robert will downplay that idea. He’ll insist the important thing is getting the ring back to Finn – or at least one just like it.

Mac will help Robert as they scramble to get a replacement before Finn notices. Meanwhile, Felicia will reach out to Anna and accidentally plant doubts about her relationship. GH fans know Felicia actually supports Anna and Finn. She’ll just want to get a better grip on how Anna feels about Robert, but she’ll inadvertently sabotage Finn in the process.

To make matters worse, Anna will blast Finn over a secret. She’ll find out that Jordan Ashford’s (Briana Nicole Henry) condition is more serious than she thought, so she’ll wonder when Finn was going to tell her about this. The doc may argue that he had to protect his patient’s wishes and confidentiality, but Anna may not see it that way.

Over with Laura Webber (Genie Francis) and Curtis Ashford (Donnell Turner), they’ll resume their search for Ryan Chamberlain (Jon Lindstrom). It’s sure to come with a few more twists and turns. Meanwhile, Ava Jerome (Maura West) will kiss Dr. Kevin Collins (Jon Lindstrom) as their scheme continues. When Julian Jerome (William deVry) spies the lip lock, he’ll fly into a rage and snap that Kevin should take his hands off Ava.

Across town, Nina Reeves (Michelle Stafford) and Elizabeth Webber (Rebecca Herbst) will discuss their kids with Willow Tait (Katelyn MacMullen). Unfortunately, Nina will make quite a scene during this parent-teacher conference. General Hospital spoilers say Nina will gripe about a completely unacceptable situation. It appears she’ll think Ms. Tait needs to do a better job of handling it.

Liz knows Willow’s doing her best, but Nina’s grudge will cloud her view. She’s got a beef with Willow, so this incident is only going to rev up the friction. Next, Michael Corinthos (Chad Duell) will assure Sasha Gilmore (Sofia Mattsson) that her secret’s safe with him. Of course, he won’t be talking about the fake daughter secret. It’ll simply be some lie Sasha cooks up to cover her mistake at GH.

Sasha was drugged and mumbling about Nina when Michael walked in. He looked baffled when Sasha wished Nina were her real mom. Michael may mention what Sasha said, but she’ll think fast and offer an explanation. Sasha’s a pro at covering her tracks, but she can only ride this lucky streak for so long!

Other General Hospital spoilers say Peter August (Wes Ramsey) and Maxie Jones (Kirsten Storms) will hope for peace. They’ve had enough surprises, so they’ll try to relax and let things bloom naturally. Will these two finally head to the bedroom for lovemaking? There’s no rush, but Maxie and Peter are definitely nearing that point. They should take that step soon enough.