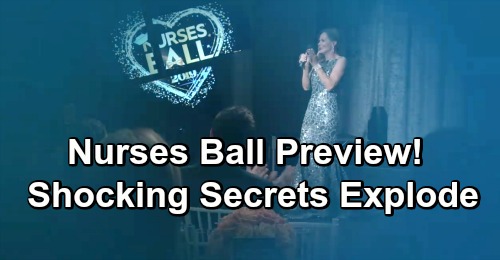 General Hospital (GH) spoilers tease that it’s almost that time of year again. The Nurses Ball is rapidly approaching, and a new promo is helping to build the excitement. GH released a video that showed some shooting preparations for this big event, but they were careful not to spill any plot details. This promo was more about getting people hyped up for the long-awaited glitz and glamour.

Fortunately, we’ve got the scoop on what’s actually happening. General Hospital spoilers say several storylines will reach a boiling point. For starters, Sam McCall (Kelly Monaco) will lose control of her con. It looks like she’ll attend the Nurses Ball with Shiloh Archer (Coby Ryan McLaughlin), but leaving early will be a bad call – and not because they’ll miss some fantastic performances!

Sam will ultimately feel overwhelmed and powerless to stop what’s in motion, but help should be on the way. Will Jason Morgan (Steve Burton) come to Sam’s rescue? Based on Jason’s track record, we’d say that’s likely. However, there’s a good chance riled up Kristina Corinthos-Davis (Lexi Ainsworth) will pitch in as well.

Meanwhile, a shocking secret will come to light. General Hospital spoilers say Lucas Jones (Ryan Carnes) will put together some clues that lead to conflict. It sounds like he’ll figure out that Willow Tait (Katelyn MacMullen) is Wiley Cooper-Jones’ birth mom. What he won’t figure out is that the real Wiley is dead!

Nevertheless, Brad Cooper’s (Parry Shen) deception will leave Lucas fuming. Lucas’ outburst should make Brad even more determined to keep the baby swap secret quiet. He could lose Lucas for good if the truth gets out. Speaking of truths coming out, we’ll see some movement in the fake daughter plot. Will Sasha Gilmore’s (Sofia Mattsson) scam with Valentin Cassadine (James Patrick Stuart) explode?

The Nurses Ball would be an excellent time for this bomb to drop, but look for the tension to rise between Willow and Nina Reeves (Michelle Stafford), too. All signs point to Willow being Nina’s biological daughter, so GH has to keep these confrontations going. The more they hate each other, the trickier things will be whenever this secret’s exposed.

Of course, the Ryan Chamberlain (Jon Lindstrom) case will be resolved during the Nurses Ball chaos. We’ll learn his fate, which undoubtedly involves Ryan being alive and out for revenge. Laura Webber (Genie Francis) and Curtis Ashford (Donnell Turner) will find themselves in a tight spot, but what about Ava Jerome (Maura West)? Will she take charge of the situation and get the vengeance she craves?

Ava will plan to do her worst, so stay tuned for the great scenes ahead. We’ll give you updates as other GH news comes in. Stick with the ABC soap and don’t forget to check CDL often for the latest General Hospital spoilers, updates and news.