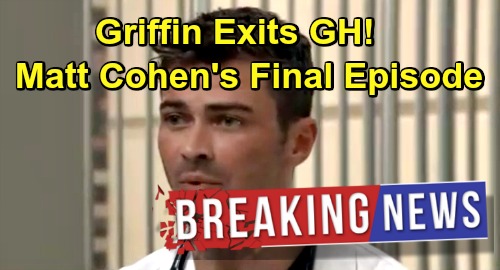 General Hospital (GH) spoilers tease that Matt Cohen is officially out as Griffin Munro. In fact, this exit will be rushed as the actor’s last air date is Friday, March 22, according to tvinsider.com. The good news is the showrunners aren’t killing him off so it is possible that he will return down the road.

General Hospital kept him an emotion wreck after Kiki Jerome’s (Hayley Erin) shocking murder. In an evil twist, Ryan Chamberlain (Jon Linstrom) framed him for his girlfriend’s murder. It took a little tim to figure out it wasn’t him. As you can imagine, it was very difficult for him. At any rate, the writers knew what they were doing and it looks like the reason was to give him an exit.

We’ll likely see him leave quietly. Perhaps he’ll tell Anna DeVanne (Finola Hughes) that he needs time away. We saw in the preview for Thursday’s episode, March 21, that he told her he was in no position to support anyone right now. Anna wanted him to listen and give her advice on her little issue with her sister Alex (Finola Hughes).

As for where Matt will be appearing next, you can catch him in the short film, Mama Bear. It will be showing at film festivals in California –starting as early as Sunday, March 24— and in Iowa and Pennsylvania. Depending on how well the short film does, more locations will be added.

Are you shocked by Griffin’s sudden exit? Don’t forget to come back later for more General Hospital (GH) spoilers, news, and casting updates!