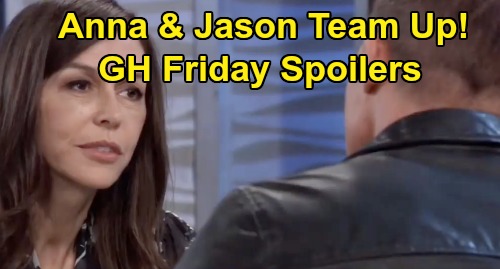 General Hospital (GH) spoilers for Friday, November 22, tease that Anna Devane (Finola Hughes) will catch up with Jason Morgan (Steve Burton). She’ll be sorry to hear about Sam McCall’s (Kelly Monaco) prison sentence, but maybe she can take Jason’s mind off his troubles. Anna will suggest she needs Jason’s help solving a mystery.

GH fans can expect Anna to relay concerns about Hayden Barnes (Rebecca Budig) on Friday. Will she share them with Jason and wonder what he thinks? Jason hasn’t been in Hayden’s orbit, but it could still help for Anna to open up and work through her own suspicions about Hayden. She won’t trust Hayden at all, so Jason’s input could be useful.

Of course, the topic of Peter August (Wes Ramsey) should come up at some point. Jason’s takedown mission will be back on soon, so perhaps talking about Peter will renew his fight. Anna may not trust Hayden, but it’s Peter that Jason’s more concerned about.

Other General Hospital spoilers say Valentin Cassadine (James Patrick Stuart) will back Hayden into a corner. He just summoned Hayden to Wyndemere and asked her to listen to his proposition. Valentin advised Hayden to keep an open mind since they could be useful to each other. When Hayden doesn’t cooperate, Valentin will make it clear that things could get very unpleasant for her.

Hayden will ultimately agree that “once it clears,” she’ll tell Valentin everything she knows about the portrait. Whether a transaction actually happens or not, Hayden’s not going to reveal whole story. Valentin will still suspect Hayden’s holding out on him, so it looks like he’ll plot to have her abducted soon. That abduction will go awry, but it shows that Valentin means business!

In the meantime, General Hospital spoilers say Jasper “Jax” Jacks (Ingo Rademacher) will react to Nina Reeves’ (Cynthia Watros) confession. She just admitted she’s not planning to marry Valentin; she’s planning to destroy him. Jax won’t understand why Nina would go too all this trouble when she could just dump Valentin and be done with him. Nina may argue that a simple breakup isn’t good enough for her. She’ll probably be looking for true vengeance and total humiliation here.

Nina could be a valuable ally if Jax eventually chooses to bring her into the plan against Valentin. That seems way too risky since Nina has such a weak spot for him, but it could certainly happen. Jax may not let Nina in on the Nikolas Cassadine (Marcus Coloma) right now, but he might later if he’s convinced Nina’s truly washed her hands of Valentin.

After Nina wraps up her chat with Jax, she’ll return home to Valentin and Charlotte. They’ll act like one big happy family, but how long can Nina keep up the charade until she cracks? Valentin’s love for Charlotte may be his last hope at hanging onto Nina. It’ll be interesting to see how Nina’s inner battle turns out.

In the Corinthos home, Sonny Corinthos’ (Maurice Benard) suspicions will be on the rise. He’ll get frustrated with Carly Corinthos (Laura Wright), and Jax will probably be the reason why. Friday’s preview video shows Sonny shouting, “You think for one second that he won’t turn me over to the cops?!” Sonny will likely be worried about Jax blowing up the Dev Cerci (Ashton Arbab) drama, but Carly will offer reassurance. She’ll know Jax is focused on a far bigger secret these days!

Carly will keep quiet about Nik for now, which is sure to lead to more friction in her relationship. Sonny can sense that something’s up here, even if he can’t quite put his finger on it. Next, Stella Henry (Vernee Watson) will visit Mike Corbin (Max Gail). He’ll seemingly have reverted to the past in his mind and most likely won’t remember Stella. Mike will insist nobody’s ever going to see him around this place again. His mental decline will definitely be noticeable, so Stella will pass along updates soon enough.