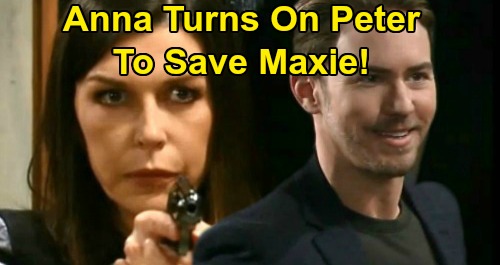 General Hospital (GH) spoilers tease that Jason Morgan (Steve Burton) won’t be able to rest until Sam McCall (Kelly Monaco) walks free. It’s killing him to have Sam behind bars – especially now that she’s been convicted and sentenced. At least before they had the hope of a trial to cling to. Diane Miller (Carolyn Hennesy) can appeal the judge’s verdict, but Sam had a judge who was known for being quite fair. As a result, Diane warned her efforts would probably be futile.

However, Jason can’t just sit around and no nothing. That just isn’t his style. Despite Carly Corinthos’ (Laura Wright) warning not to do anything too daring, Jason will surely do just that. Daring is his middle name! General Hospital spoilers say Damian Spinelli (Bradford Anderson) will help Jason, so it sounds like they’ll really get down to business here. If they can prove Peter August (Wes Ramsey) set Sam up, it might help the judge see the case in a new light. It could give Diane some ammo for her appeal.

The judge found Sam guilty because she couldn’t buy that Jason was helpless. Even so, it couldn’t hurt to prove Peter was the one who helped Shiloh Archer (Coby Ryan McLaughlin) escape with deadly intentions. It’s ridiculous that Shiloh was made out to be some sort of hero in court when he was holding multiple people hostage – including little “Wiley Cooper-Jones” (Erik and Theo Olson) at one point. Shiloh was a dangerous man and was blackmailing a man who’s just as dangerous.

Regardless of whether this truly helps Sam, Jason will want Peter to pay the price. Will he get help from a surprising source? GH spoilers say Anna Devane (Finola Hughes) will take Hamilton Finn’s (Michael Easton) advice. He suggested Anna should spend a little less time worrying about Alex Devane Marick (Finola Hughes) and a little more time focusing on her bond with Peter.

General Hospital spoilers say Peter will find himself feeling unsettled during the week of November 25-29. Will that be due to Anna’s return and efforts to reconnect? Could it be due to suspicions about Jason and Spinelli’s plan instead? Perhaps it could even be a mixture of both.

Peter might be shaken if he gets a hint about the plot against him and then worried when he realizes Anna is back at the wrong time. It’s not like Peter will be able to devote his full attention to bonding if Jason’s hot on his trail. General Hospital spoilers say Anna will get a clue during the week of December 2-6. She’ll notice Peter’s not quite himself and wonder what’s got him so distracted.

Of course, Anna is also close to Robert Scorpio (Tristan Rogers), who remains suspicious about Peter. Between Jason and Robert, Anna may realize there’s more to the story here. She’s missed a lot since she’s been out of town, so she’ll inevitably take a closer look at Peter and he man he’s turned into.

It sounds like Anna could be on the verge of uncovering some horrifying secrets. Will she learn about Peter’s link to Helena Cassadine (Constance Towers)? What about the attack on Andre Maddox (Anthony Montgomery) and the hit on Drew Cain (Billy Miller)?

As much as Anna hates to do it, she may be forced to accept Peter’s dark side and blow up his world. Anna may save Maxie Jones (Kirsten Storms) from getting in any deeper. General Hospital spoilers say some stunning developments are on the way, so don’t miss what’s in store. We’ll give you updates as other GH news comes in. Stay tuned to the ABC soap and don’t forget to check CDL often for the latest General Hospital spoilers, updates and news.