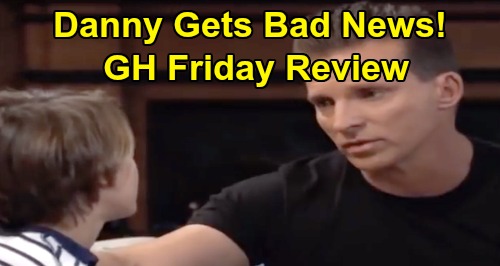 General Hospital (GH) spoilers review for Friday, November 22, reveal that Nikolas Cassadine (Marcus Coloma) lurked in Wyndemere and nearly hit Valentin Cassadine (James Patrick Stuart) over the head with a fireplace poker but was thwarted when Hayden Barnes (Rebecca Budig) arrived at the castle. Nikolas then went back in the shadows, while Hayden entered and listened to Valentin’s pitch.

Valentin came right to the point and offered Hayden a great deal of money for information about why Helena Cassadine’s (Constance Towers) portrait was of such importance. Hayden played innocent and balked at the money, but Valentin pressed the issue and told Hayden that he had other ways of exerting influence and this would get unpleasant. Hayden then rather quickly agreed to $250K in exchange for information.

Valentin wanted a little intel up front, but before Hayden could cough up any information, Charlotte Cassadine (Scarlett Fernandez) interrupted them, and Hayden left. Charlotte then asked why Valentin hadn’t introduced her to the lady, and Valentin ominously said that it was because there was no need – Charlotte would never see her again.

Meanwhile, Jax was relieved to hear from Nina Reeves (Cynthia Watros) that she had devised a plan to give Valentin a taste of his own medicine. She explained that after Valentin lied to her about Sasha Gilmore (Sofia Mattsson) being her daughter, she decided to deceive him like he deceived her. Still, Jax cautioned Nina about what she was doing, and urged her to cut Valentin loose and get on with her life.

Jax even hinted around about the possibility of getting together with Nina himself, and Nina was clearly affected by this, but then she noted that she might actually want to forgive Valentin. Jax was astounded by this, and Nina went on to explain that when Charlotte got abducted, her deception all seemed pointless. She said that she considers the three of them to be a family, and that it’s hard to give that up.

To that, Jax said that all he could do is give Nina a better alternative – meaning himself – and hope that she’s smart enough to take it. Nina then left and went home to Valentin and Charlotte, leaving Jax frustrated. Nikolas then arrived back home from Wyndemere, and Jax announced that he’s done, and if they can’t find the codicil by New Year’s Eve, then he’s going to tell Nina everything.

Later, Nikolas phoned Hayden and told her that he needed to see her tomorrow, that it was urgent, and that everything has changed. And given that GH spoilers indicate that Hayden will soon be in danger, one has to wonder who she’s going to be in danger from – Valentin or Nikolas? Since Nikolas now knows that Hayden appeared to be on the verge of handing over information to Valentin, he likely considers her an enemy.

Jason explained that his mom was found guilty of manslaughter in the death of Shiloh Archer (Coby Ryan McLaughlin) and that she was sentenced to two years, but that the lawyers were working on an earlier release. Danny was understandably upset but decided that it was best for himself and Scout Cain (Ella Ramacieri) to stay with Monica for the time being. Jason agreed that this was an acceptable plan and promised to be there for Danny always.