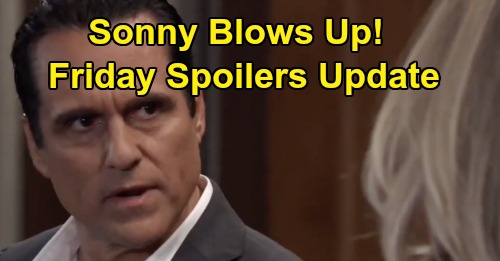 General Hospital (GH) spoilers update for Friday, November 22, teases that Stella Henry (Vernee Watson) will head over to Mike Corbin’s (Max Gail) memory care facility. She’ll hope to visit her friend and tell him all about her time in London. Unfortunately, Mike won’t be able to carry on a meaningful conversation. He’ll seemingly think he’s in the past – some previous time of his life.

Mike will suggest Stella’s never going to see him around there again. He’ll plan on leaving, but that’s obviously not going to happen. The staff surely keeps a close eye on Mike since he escaped from the facility once before. Even so, Stella will be saddened to see how much Mike’s declined. She’ll feel it’s her duty to provide updates on Mike’s condition, so Sonny Corinthos (Maurice Benard) should be hearing from her on Friday.

In the meantime, Sonny will have something else on his mind. He’ll be worried about Jasper “Jax” Jacks (Ingo Rademacher) and the threat he poses. Sonny will be irritated when Carly Corinthos (Laura Wright) keeps trying to defend and cater to Jax. Her hubby just won’t get it and will ultimately lash out.

Sonny will apparently bring up the Dev Cerci (Ashton Arbab) situation and how Jax could hand him over to the cops. He’ll feel like Jax would do it in a heartbeat. Sonny just won’t trust Jax, and he won’t appreciate how Carly’s siding with him. He’ll grow increasingly suspicious of what Carly’s up to and how Jax fits in.

Of course, GH fans know Carly’s keeping a huge secret for her ex. She’s in the loop on Nikolas Cassadine’s (Marcus Coloma) survival, but she’ll keep Sonny in the dark for the time being. That’s bound to cause more issues in their marriage. Elsewhere, Jax will gripe about Nina Reeves’ (Cynthia Watros) strategy. It doesn’t look like he’ll approve of Nina’s efforts to secretly destroy Valentin.

Jax certainly doesn’t mind if Valentin goes down, but he may think Nina should dump him and be done with it. Why carry out a charade like this? Nina may feel like it’s the only way to set Valentin up for true devastation. She can make Valentin think he’s going to have it all and rip the rug out from under him. Nina may want Valentin to be as humiliated and heartbroken as she was on their previous wedding day.

Other General Hospital spoilers say Hayden Barnes (Rebecca Budig) will clash with Valentin. She’ll show up at Wyndemere, where Valentin just asked her to meet him. Valentin wants Hayden to keep an open mind about a proposition, but it won’t take long for conflict to erupt. Hayden will end up rattled during this conversation. She’ll nervously tell Valentin that “once it clears,” she’ll reveal everything she knows about the portrait.

Valentin won’t look like he buys what Hayden’s selling, so don’t be surprised when he goes after her on the pier. Within the next couple episodes, Hayden will almost get snatched! It appears Valentin will be responsible, so this is all building to Hayden’s looming exit. She’ll eventually have to flee Port Charles and go into hiding, but more drama has to play out first.

Finally, Anna Devane (Finola Hughes) will have a chat with Jason Morgan (Steve Burton). She’ll express her sympathy over Sam McCall’s (Kelly Monaco) predicament and ask for Jason’s help with a mystery. Will that mystery have something to do with Hayden? Anna will remain wary of Hayden, so she might take steps to uncover what Hayden’s plotting.

However, it’s possible Anna’s mystery will be related to Peter August (Wes Ramsey). He’ll likely be mentioned during this discussion with Jason. Maybe a Peter reminder will reignite Jason’s vengeful fire. He’s got major suspicions regarding Peter, so he’ll get back to work with Damian Spinelli (Bradford Anderson) soon. They need to concentrate on their mission and hopefully prove Peter’s a dangerous man.