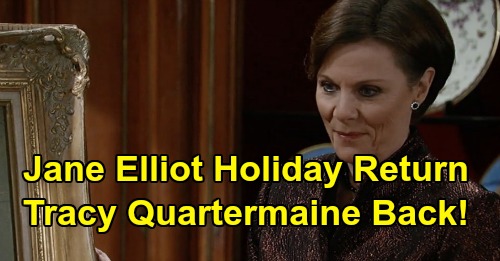 General Hospital (GH) spoilers tease that a familiar face is headed back to Port Charles just in time for the holidays. As EW reported, Jane Elliot’s return as Tracy Quartermaine has been confirmed. You can expect Tracy in Port Charles again this December, so that’s wonderful news. Tracy’s a fantastic character that many fans have been missing since her departure back in May 2017.

CDL already reported on the reliable rumblings about Tracy’s comeback, but it’s good to have some hard evidence. General Hospital spoilers say Tracy will naturally catch up with a few family members. Christmastime is the perfect opportunity. It’s always fun to see the fam come together (and bicker), so we’ll all look forward to Tracy’s homecoming.

Of course, Tracy wouldn’t be Tracy if she didn’t stir the pot a little! It seems she’ll find herself caught up in some ELQ chaos as well, so that should be entertaining. In the episode airing November 21, Traci was brought up several times. That’s often a tell-tale sign that a character’s returning, so this confirmation just backs that up.

Brook Lynn Ashton (Amanda Setton) pointed out that Granny ran off into the sunset with Luke Spencer (Anthony Geary). She later added that Granny didn’t approve of her life choices. Ned Quartermaine (Wally Kurth) also groaned about how Brook Lynn was becoming like his mother. These are all some great little clues to set up Tracy’s return to PC.

Tracy will be sporting a new look when she hits town. Elliot will have a different hair color and style than fans remember, but she’ll be as radiant as ever. Naturally, Tracy will deliver the same old attitude we all know and love. Elliot can deliver lines like no other! She began playing Tracy in 1978, so it’s nice that GH is bringing back a character rooted in the show’s history.

General Hospital spoilers say Tracy’s return will bring some Quartermaine mayhem and shake things up for several characters. Are you eager to see Tracy back in Port Charles? Have you missed Jane Elliot in the role? We’ll give you updates as other GH details emerge. Stay tuned to ABC soap and don’t forget to check CDL often for the latest General Hospital spoilers, updates and news.