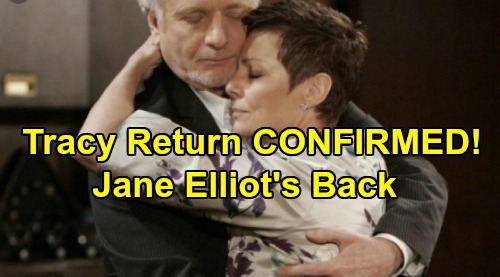 General Hospital (GH) spoilers tease that a shocking comeback may be in the works – and it could be tied to a recent recast. It was a surprise when the news broke about Amanda Setton taking over the role of Brook Lynn Ashton. She’s not a character we’ve heard much about in quite a while. However, it looks like Brook Lynn may play a role in setting up a major Quartermaine story.

Ned Quartermaine (Wally Kurth) will naturally be part of the drama his daughter ushers in, but there’s another Quartemaine family member who’s set to get involved. There’s been no official announcement on this yet, but reliable insiders insist Jane Elliot is headed back to General Hospital as Tracy Quartermaine!

Tracy departed GH back in May 2017, so we’re long overdue for another appearance. Many viewers feared it wouldn’t happen after Elliot’s exit interview with TV Insider. She suggested she was burnt out and ready to retire, but her comments still had a dash of hope mixed in. When asked if she’d ever consider a brief General Hospital comeback, Elliot couldn’t rule it out.

It sounds like this stint will indeed be short-term, but insiders maintain that it’s happening. It makes sense considering Brook Lynn’s suspicious arrival and all the rumblings about a Quartermaine storyline. It’ll be interesting to see what Tracy’s up to these days. It’ll certainly be nice to see Elliot back in the role as well!

General Hospital spoilers say Ned has some shockers and shakeups in his future, so stay tuned. Are you excited that Jane Elliot is likely reprising her role as Tracy Quartermaine? We’ll give you updates as other GH details emerge. Stick with the ABC soap and don’t forget to check CDL often for the latest General Hospital spoilers, updates and news.

UPDATE: Since CDL posted our original story it has been confirmed on EW by GH and ABC that Tracy will be home for the holidays!