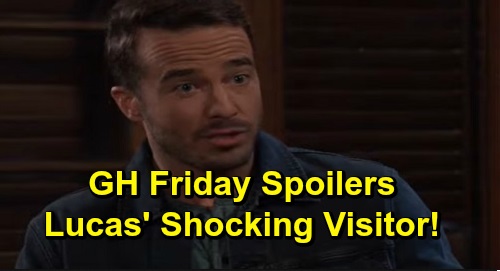 General Hospital (GH) spoilers for Friday, November 8, tease that Lulu Spencer (Emme Rylan) will meet up with Maxie Jones (Kirsten Storms). Charlotte Cassadine (Scarlett Fernandez) will end up joining them for a sweet treat later, but they’ll enjoy some adult conversation first. Lulu will likely get updates on Maxie asking Peter August (Wes Ramsey) to move in with her.

Friday’s GH preview video shows Lulu saying, “It’s about damn time.” That may or may not be related to Peter’s move-in, but Lulu will undoubtedly offer support either way. She’ll be happy that Maxie’s found love and happiness again after Nathan West’s (Ryan Paevey) tragic demise. Of course, neither one of them know about all the dark secrets Peter’s keeping.

Speaking of dark secrets, Nikolas Cassadine (Marcus Coloma) has a few of those, too. Nik seems poised for another one since he’s apparently on his way to murder Cassandra Pierce (Jessica Tuck). General Hospital spoilers say Nikolas will continue down that ominous road and assure Cassandra he’s taken care of everything.

However, a lot can go wrong when a plot like this is in motion. Nikolas’ deadly scheme may not work out as well as he expects. As for Sam McCall (Kelly Monaco), she’ll be told to freeze as Harrison Chase (Josh Swickard) arrives with backup. Once Sam explains, the cops will hopefully be smart enough to grasp that Sam wouldn’t hit the guard and stick around to call for help.

Other General Hospital spoilers say Bobbie Spencer (Jacklyn Zeman) will have a tense encounter with Julian Jerome (William deVry). She’ll insist that only one man will ever truly be Lucas Jones’ (Ryan Carnes) father – and it’s not Julian. Bobbie will naturally be referring to Lucas’ adoptive father, Tony Jones (Brad Maule).

In the cemetery, Lucas will gaze at dead Tony’s grave and suggest he’d give anything to talk to him again. Luckily, Lucas is about to get his wish! Brad Maule will reprise his role in spirit form, so Lucas can unload his problems and get some advice from the beyond.

Next, Brad Cooper (Parry Shen) will get some guidance as well. He’ll have a chat with Willow Tait (Katelyn MacMullen), who’ll be hopeful about Brad and Lucas working things out. Willow obviously won’t have the full story, but she’ll defend Julian a bit on Friday. She’ll argue that Julian only wants what’s best to “Wiley Cooper-Jones” (Theo and Erik Olson), even if he doesn’t always make the best choices.

At Shadybrook, Jasper “Jax” Jacks (Ingo Rademacher) will pay Ava Jerome (Maura West) a visit. He’ll confess that what happened to Ava was his fault, so Ava won’t understand what he means. It seems Jax may come clean to Ava and count on her to keep Nikolas’ survival under wraps. It won’t take Ava long to hit the roof. She thought she was losing her mind and could lose Avery Corinthos (Ava and Grace Scarola) over this.

Ava will snap that no one takes advantage of her, but Jax may make a compelling case for why she should keep quiet. Not only would Ava’s silence help Spencer Cassadine (Nicolas Bechtel), it could help Ava make amends for recanting her statement against Valentin. Ava might agree to stay tight-lipped on one condition. There’s no way Ava’s going to let Sonny Corinthos (Maurice Benard) deny her contact with Avery, so she may urge Jax to handle it or else she’ll blow this Nik shocker up.

Finally, Jason Morgan (Steve Burton) will get an unsettling phone call. He’ll hear about Sam’s work detail gone wrong at the park and promptly do some investigating. General Hospital spoilers say some great drama’s ahead, so stay tuned. We’ll keep you posted as other GH news comes in. Stick with the ABC soap and don’t forget to check CDL often for the latest General Hospital spoilers, updates and news.