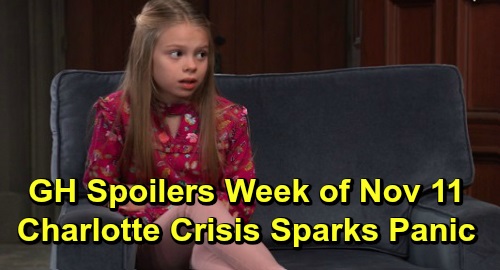 General Hospital (GH) spoilers for the week of November 11-15 tease that we’ll see some heated confrontations. First, let’s discuss Lucas Jones (Ryan Carnes) and the mess he’s facing. He was convinced Brad Cooper (Parry Shen) was cheating on him, but Brad’s recording proved it was a setup. Lucas still has to deal with Brad’s deception (which is far worse than he realizes), but he’ll turn his attention to Julian Jerome (William deVry) first.

Julian will get an earful from Lucas, who’ll be furious that Julian’s trying to destroy his family. General Hospital spoilers say they’ll get down to the nitty-gritty of their issues. Later, Brad will corner Julian, who’ll inevitably be trying to spin another story. Julian can’t tell Lucas the truth without putting “Wiley Cooper-Jones’” (Theo and Erik Olson) future at risk, but he won’t want Brad to get off scot-free.

While Brad and Julian face off, Hamilton Finn (Michael Easton) will continue to bond with his daughter. He’ll get some nice family time with Violet Barnes (Jophielle Love), but an unexpected interruption’s on the way. Violet and Hayden Barnes’ (Rebecca Budig) visit will come to an abrupt halt, so it’s possible Anna Devane (Finola Hughes) will surprise Finn with her return.

Over with Harrison Chase (Josh Swickard), he’ll deliver some advice. General Hospital spoilers say Chase will warn Robert Scorpio (Tristan Rogers) about something – most likely related to Finn and backing off. Chase is a protective little bro, so he’ll want to step up for Finn as best as he can.

Other GH spoilers say panic will erupt for another cluster of characters. Valentin Cassadine (James Patrick Stuart), Nina Reeves (Cynthia Watros) and Lulu Spencer (Emme Rylan) will all be frantic. Some disturbing news will leave this group reeling, so it makes sense for Charlotte Cassadine (Scarlett Fernandez) to be at the center of the chaos.

Lulu and Valentin will manage to come together in the week ahead. They’ll put aside their differences, so that’ll probably be for Charlotte’s sake. Of course, this truce won’t last, but it’s good that they’ll focus on what’s important for a while.

Meanwhile, Sonny Corinthos (Maurice Benard) will have a meeting with Ava Jerome (Maura West). They’ll talk about Avery Corinthos’ (Ava and Grace Scarola) well-being and how Ava’s latest crisis will affect co-parenting. Next, T.J. Ashford (Tajh Bellow) will settle on a diagnosis. Will he help Finn out by discovering what’s wrong with Alexis Davis (Nancy Lee Grahn)?

Molly Lansing-Davis (Haley Pullos) would certainly appreciate T.J. coming to her mom’s rescue here. This could also be step one toward exposing Kendra Lennon (Michelle Argyris), but Julian may have to pitch in. He’s the one who seems poised to truly connect the dots.

Finally, Franco Baldwin (Roger Howarth) will make a significant choice, which should bring a crushing blow for Kim Nero (Tamara Braun). It sounds like Franco will be ready to submit to the memory procedure, but Kim will have Monica Quartermaine (Leslie Charleson) to lean on.