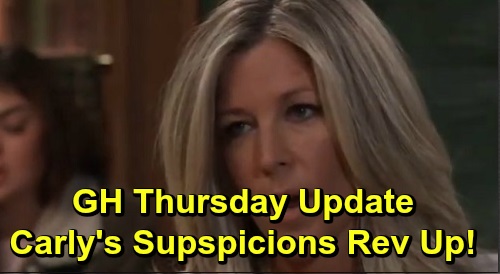 General Hospital (GH) spoilers update for Thursday, November 7, teases Nikolas Cassadine (Marcus Coloma) will defend a big risk. It looks like he’ll plan to go out, which is something Jasper “Jax” Jacks (Ingo Rademacher) won’t approve of. Just being back in Port Charles is risky enough! Nevertheless, Nikolas will insist he’s not going to get caught. He won’t think he’ll be recognized, which probably means he’s either headed to a location where no one knows him or will be disguised.

Over with Sam McCall (Kelly Monaco) and Cassandra Pierce (Jessica Tuck), they’ll be on work detail at the park. General Hospital spoilers say Sam will notice that Cassandra’s on edge. Cassandra will realize Nikolas could turn the escape she wants into a deadly nightmare. Sam will wonder if Cassandra thinks her enemies are out to get her. Cassandra may downplay her fears, but they’ll definitely be revving up.

Sam’s sure to get wrapped up in Cassandra’s drama soon, but let’s talk about Nelle Benson (Chloe Lanier) for now. She’ll get a visitor back at Pentonville – one who’s curious about Nelle’s new information. Martin Gray (Michael E. Knight) will be there to talk about a “guy of dubious distinction.” He’ll push his client to divulge who she’s talking about as Nelle flashes a mischievous smile.

Nelle’s formed a bond with Ryan Chamberlain (Jon Lindstrom), so this could tie in with him. She also crossed paths with Shiloh Archer (Coby Ryan McLaughlin) a couple times, and that link went nowhere – at least not yet. Shiloh’s the kind of man who can haunt beyond the grave – as we see with Sam’s situation along with Alexis Davis’ (Nancy Lee Grahn) suffering. It’s possible Nelle’s info involves something Shiloh-related.

Cassandra has been keeping a close lid on Nikolas as her partner in crime. She probably hasn’t piped up about Nik within earshot of Nelle, but you can bet Nelle’s been soaking in all available information – whatever that may be. No matter who Nelle’s got on her mind this Thursday, she’ll hope Martin can make it work in her favor.

Nelle might hope she can cut a deal of some sort. Even if Nelle can’t earn her freedom, she could at least score a transfer to a better prison – and the opportunity to make her getaway during that transfer. Meanwhile, Sasha Gilmore (Sofia Mattsson) will continue to regret the mess she’s created. GH viewers know Sasha wasn’t solely to blame, but she took responsibility and that impressed Carly Corinthos (Laura Wright). Carly will suggest she’s pleased with how Sasha handled herself in the aftermath.

Other General Hospital spoilers say Josslyn Jacks (Ingo Rademacher) will be anxious to move in with Jax. She’ll announce her decision, but he may pump the brakes due to Nikolas. As for Carly, she’ll get called over to help Jax with a problem. Carly will grow more suspicious by the second, so it’s just a matter of time until Jax spills about Nik.

General Hospital spoilers say Carly will learn a whopper of a secret during November sweeps. She’ll be asked to keep Sonny Corinthos (Maurice Benard) out of the loop, so this has Jax written all over it. Elsewhere, Nina Reeves (Cynthia Watros) will encourage Valentin Cassadine (James Patrick Stuart) to tell her what’s troubling him. Valentin will confess it’s Jax and will hope he can get a grip on this threat.

Later, Nina will make a trip to Nathan West’s (Ryan Paevey) grave. She’ll talk to “J” and hopefully get some comfort out of the experience. General Hospital fans won’t want to miss what’s in store. We’ll give you updates as other GH news comes in. Stay tuned to the ABC soap and don’t forget to check CDL often for the latest General Hospital spoilers, updates and news.