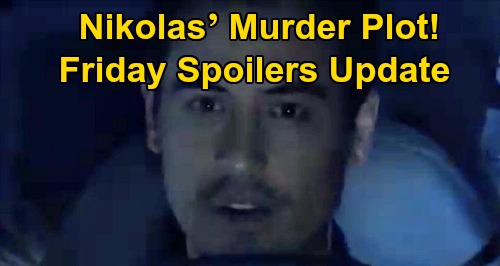 General Hospital (GH) spoilers update for Friday, November 8, teases that Jason Morgan (Steve Burton) will get an upsetting phone call. He’ll probably hear about Cassandra Pierce (Jessica Tuck) bashing the guard in the head and making a break for it, which leaves Sam McCall (Kelly Monaco) to face questions. Sam will be confronted in the park by Harrison Chase (Josh Swickard) and his backup, so she’ll freeze and put her hands up like Chase demands.

Sam was hoping to keep her head down and avoid any more trouble, but at least she did everything right. She stayed put, tended to the guard and used the walkie talkie to call for help. Sam’s trying to play by the rules and not do anything that could jeopardize her freedom. As Sam keeps working toward that freedom, Jason will launch an investigation. He may dig into this Cassandra situation and try to figure out who’s helping her.

Of course, Nikolas Cassadine’s (Marcus Coloma) “help” may not be the kind Cassandra needs. He had a sinister look in his eyes as he drove Cassandra down the back way. Nikolas ominously assured Cassandra that no one would ever find her. She was hoping to disappear – but not permanently!

However, Cassandra can be a pretty resourceful gal. It’ll be interesting to see if she can wiggle out of this mess and avoid getting killed. Over with Bobbie Spencer (Jacklyn Zeman), she’ll have a harsh exchange with Julian Jerome (William deVry) at GH. It seems Bobbie will realize there’s drama going on between Julian and Lucas Jones (Ryan Carnes). Bobbie will contend that there’s only one man who’ll ever be Lucas’ father, so she’ll naturally mean Tony Jones (Brad Maule) – Lucas’ adoptive dad.

It turns out Lucas will enjoy a visit with Tony’s spirit. As Lucas wishes he could speak with Tony again, Tony himself will appear in the cemetery. He’ll be a ghost, but that doesn’t mean he can’t offer some solid guidance! Lucas will open up to his adoptive father and get the support he needs in this moment.

Other General Hospital spoilers say Willow Tait (Katelyn MacMullen) will be there for Brad Cooper (Parry Shen). After Brad rants about Julian stirring up trouble, Willow will note that Julian just wants what’s best for his grandson. She may hope that Julian, Brad and Lucas can all get on the same page for “Wiley Cooper-Jones’” (Erik and Theo Olson) sake.

Meanwhile, Ava Jerome (Maura West) will face a Shadybrook shocker. She’ll be taken aback when Jasper “Jax” Jacks (Ingo Rademacher) pays her a visit, but the real bombshell will come in his confession. Jax will take the blame for Ava’s current predicament and most likely reveal that Nikolas Cassadine (Marcus Coloma) is indeed alive. He’ll probably explain their plot to take down Valentin Cassadine (James Patrick Stuart) and urge Ava to stay silent.

Ava will fume since she let Laura Webber (Genie Francis) talk her into thinking she was crazy. She’ll be upset that Jax let it get this far, but he’ll focus on where they go from here. If Ava wants to secure Spencer Cassadine’s (Nicolas Bechtel) future and make it up to Nik for recanting her statement against Valentin, keeping quiet is the right call.

Ava will fret about losing Avery Corinthos (Ava and Grace Scarola) to Sonny Corinthos (Maurice Benard), who could try to cut her out of the picture entirely. She’ll lash out at Jax, but he may promise to deal with Sonny. All Jax needs Ava to do is keep up the crazy charade for a while and not draw attention to herself. They’re hoping to find the codicil ASAP and put this mission to rest.

Elsewhere, Lulu Spencer (Emme Rylan) will tell Maxie Jones (Kirsten Storms) that it’s about time! Will she be excited to learn Maxie and Peter August (Wes Ramsey) are taking the next step? Peter is moving in with Maxie, so Lulu may be pleased to know her friend’s truly moving on from Nathan West (Ryan Paevey). It’s been a slow process, but Maxie’s heart as healed – at least as much as it can. Too bad more heartbreak’s looming due to Peter’s hidden sinister side!

Charlotte Cassadine (Scarlett Fernandez) will soon join Maxie and Lulu, so they’ll all chat over dessert. Sadly, General Hospital spoilers hint that Charlotte could land in peril by the time Monday rolls around. We’ll give you updates as other GH news comes in. Stick with the ABC soap and don’t forget to check CDL often for the latest General Hospital spoilers, updates and news.