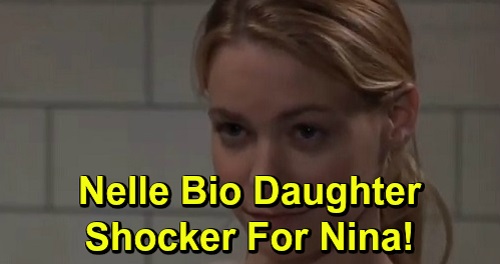 General Hospital (GH) spoilers tease that some shocking connections are being revealed in Port Charles. During Nelle Benson’s (Chloe Lanier) meeting with Martin Gray (Michael E. Knight), he scolded her for not mentioning her new husband at the parole hearing. Martin thought it could’ve presented a picture of stability, but Nelle warned her hubby’s background could’ve been an issue.

Nelle also talked about what she stands to gain if Martin gets her out of prison. It’s obvious that Nelle married Shiloh Archer (Coby Ryan McLaughlin) before his death and intends to get her hands on those ELQ shares. Nelle smiled mischievously when she learned Shiloh died and suggested that her day just kept getting better. She knew Shiloh would no longer be in her way once she was on the outside.

Of course, Nelle’s plan was derailed by that parole denial. She’s eager for Martin to fix this and has promised him a handsome reward in return. Here’s where things could get interesting… What was that call from Martin to Valentin Cassadine (James Patrick Stuart) all about?

Martin stated that the project Valentin wanted him to look into had just opened up a new avenue. There’s no word yet on where this hot plot’s headed, but let’s consider a few clues. The fact that Martin is working for Nelle and is also linked to Valentin is suspicious. It could mean some sort of reveal will tie these storylines together.

We should also remember Valentin’s earlier conversation with Nina Reeves (Cynthia Watros). He just told Nina they could start another search for her daughter if she wanted. Nina wasn’t keen on it since she thought it’d lead nowhere. She suggested that her mother must’ve lied and refused to set herself up for more heartbreak.

It’s intriguing that Valentin discussed continuing the real daughter hunt before he got that call from Martin, who just finished speaking with Nelle. Could GH be prepping for a major daughter twist? Will Nelle turn out to be Nina’s biological child?

General Hospital fans have been guessing Willow Tait (Katelyn MacMullen) would be Nina’s bio daughter for months. If GH writers want to tell the most predictable story possible, Willow is their gal. However, that doesn’t seem to be what they’re all about these days.

Now that GH Co-Head Writer Dan O’Connor’s work is airing along with Co-Head Writer Chris Van Etten’s, they’re trying to breathe some new life into the show. Nikolas Cassadine (Marcus Coloma) is back and it feels like they’re making an effort to surprise viewers. It’d be smart to make Nelle the daughter Nina’s been seeking – particularly because Sasha Gilmore (Sofia Mattsson) is a saint by comparison!

General Hospital even made a point to bring up the time Nelle spent as Charlotte Cassadine’s (Scarlett Fernandez) nanny. Michael Corinthos (Chad Duell) mentioned it during his chat with Sasha at Kelly’s. Nelle and Nina grew quite close before Nelle turned out to be a full-blown psycho. GH could make all these puzzle pieces fit with ease.

The question is: Does Valentin secretly know Nelle is the real deal? If so, we can understand why he’d want to bury that bombshell and find a replacement. Then again, Valentin may be in the dark. Regardless, there’s ELQ money up for grabs, and Valentin could soon find himself without a Cassadine fortune. We wouldn’t put it past him to try to and get his hands on Nelle’s windfall somehow.