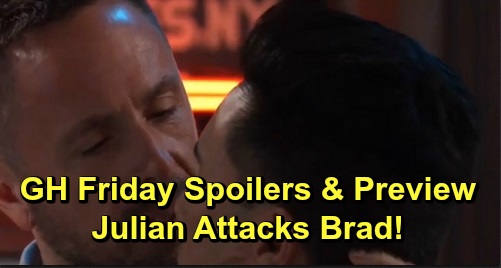 Unfortunately, Brad will cross the line when he turns his latest request into a threat. Julian doesn’t take kindly to those, so he’ll stun Brad by grabbing him by the neck. General Hospital spoilers say Ava Jerome (Maura West) will walk in on the confrontation, so she may think this is proof she was right.

Ava told Julian they’re Jeromes and they’re always going to be Jeromes – meaning they can’t escape the darkness at their core. That may or may not be true, but Ava is certainly starting to believe that about herself. While Ava interrupts Julian’s attack, Nina Reeves (Cynthia Watros) will have one of her own. Liesl’s got Valentin Cassadine (James Patrick Stuart) believing he can salvage things with his love. He’ll deny any knowledge of Sasha Gilmore’s (Sofia Mattsson) deception, but Nina’s a fool if she buys it.

Thankfully, Nina will shout that she can’t believe anything Valentin says. It’ll be interesting to see if Nina holds firm on that stance. Whatever the case, Jasper “Jax” Jacks (Ingo Rademacher) will be there to make sure Nina’s got the support she needs.

Over with Lucy Coe (Lynn Herring), she’ll think this fake daughter scam is a real goldmine. Lucy will excitedly declare that they’re going to make bajillions! Sasha probably thought her Face of Deception offer would be yanked away, but Lucy will think it’s perfect. After all, Sasha is the actual face of deception now. Lucy will think they can sell tons of products thanks to Sasha’s lie.

However, Sasha may not be keen on profiting from the pain she’s caused. Michael Corinthos (Chad Duell) will be on hand to weigh in with his thoughts on the matter as well. Sasha’s world is becoming more complicated by the second, but she’ll just want to get on the right path.

Other General Hospital spoilers say Sonny Corinthos (Maurice Benard) will catch up with Alexis Davis (Nancy Lee Grahn). He’ll suggest he hopes “she cleans him out,” so maybe they’ll be discussing the Valentin and Nina situation. Sonny hates Valentin like pretty much everyone else in town, so he may hope Nina can sue him and score a sizable chunk of his fortune.

Meanwhile, Josslyn Jacks (Eden McCoy) will raise red flags for Dev Cerci (Ashton Arbab). He’ll stumble across Joss doing something suspicious and immediately wonder what she’s up to. GH spoilers say Josslyn will show off her optimism on Friday. She may think she has a way to ease Jax’s mind about Dev – or at least make a little progress with him.

Another great General Hospital episode’s coming up, so don’t miss all the action. We’ll give you updates as other GH news emerges. Stay tuned to the ABC soap and don’t forget to check CDL often for the latest General Hospital spoilers, updates and news.