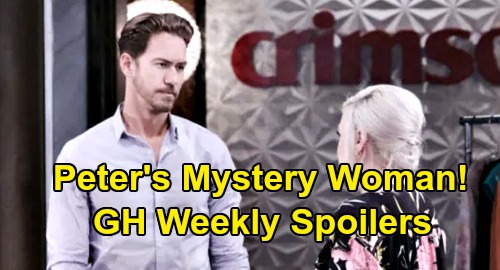 General Hospital (GH) spoilers for the week of October 14-18 tease that some interesting meetings are on the way. First, Peter August (Wes Ramsey) will have a chat with a mystery woman. It’ll undoubtedly be part of his cover-up strategy, but we all know Peter’s going down eventually. Maxie Jones (Kirsten Storms) loves and trusts Peter with all her heart, so she’s headed for a huge fall.

Over with Kim Nero (Tamara Braun), she’ll run into Elizabeth Baldwin (Rebecca Herbst) at GH. There’s a good chance they’ll clash a bit, but they may save most of it for the courtroom. Liz has given Scott Baldwin (Kin Shriner) the greenlight to play dirty if necessary.

Meanwhile, Jasper “Jax” Jacks (Ingo Rademacher) will pass along some updates. He’ll likely fill Hayden Barnes (Rebecca Budig) in on the Sasha Gilmore (Sofia Mattsson) drama as well as Nina Reeves’ (Cynthia Watros) night at his place. Hayden may wonder if things are turning romantic, but Jax may deny it – at least for now. He’ll focus on being a friend to Nina, but it’s clear that they’re on the verge of becoming more.

Other General Hospital spoilers say Liesl Obrecht (Kathleen Gati) will get an illuminating phone call. She may learn something she can use to her advantage. As for Brad Cooper (Parry Shen), he’ll squirm as he heads to Nelle Benson’s (Chloe Lanier) parole hearing. Brad will hope Nelle’s parole is denied, but she’s got a real shark of an attorney in her corner. Martin Gray (Michael E. Knight) is Nelle’s best shot at securing her freedom.

Elsewhere, Lulu Falconeri (Emme Rylan) will get into an argument with Maxie. GH fans know Lulu took some heat for how the Sasha bomb went down. That’s not how she wanted things to go, but she felt she had no other choice. Unfortunately, Lulu’s decision will continue to make waves in her own life. It’ll undoubtedly be part of the conflict with her bestie.

While Maxie rants at Lulu, Michael will battle concerns. He’ll probably worry about Nelle targeting his family again if she’s put out on the streets. At Pentonville, an act of violence will launch an investigation. Ryan Chamberlain’s (Jon Lindstrom) horrific move will force Harrison Chase (Josh Swickard) to do some digging.

Next, Ava Jerome’s (Maura West) collapse will spark worries. Laura Webber (Genie Francis) won’t want Ava to go through her crisis alone, so she’ll check on Ava and make sure her recovery goes well. Across town, Cameron Webber (William Lipton) will try to get through to Kim. He’ll make a desperate plea and perhaps hope Kim will let “Drew Cain” aka Franco Baldwin (Roger Howarth) go.

If Kim would push Franco away, it might make him more willing to undergo the memory procedure. However, Kim just won’t cave in. Franco has given Kim hope for the future, so she’ll refuse to give that up.