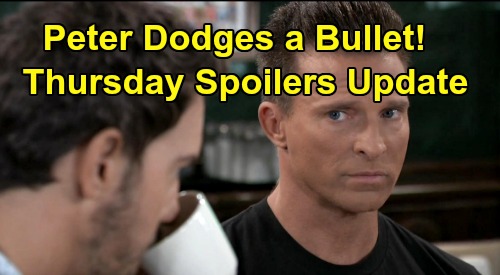 General Hospital (GH) spoilers update for Thursday, October 10, teases that Peter August (Wes Ramsey) will dodge another bullet. GH fans know Shiloh Archer’s (Coby Ryan McLaughlin) accomplice was just taken into custody. He was working for Peter, so there’ll be concerns about this guy blabbing. However, Peter’s lackey may decide he’d be better off staying tight-lipped. He might hope Peter will help him get off the hook or make a break for it like Shiloh.

Then again, Peter was plotting to kill Shiloh as part of that escape. The fake guard may decide prison is preferable since Peter’s so deadly! Whatever the case, Peter’s secrets will be kept quiet for now. He’ll turn his attention back to Maxie Jones (Kirsten Storms) and note that they were right about Sasha Gilmore (Sofia Mattsson). They suspected Sasha wasn’t the real deal, but they ultimately figured they were wrong thanks to the rigged DNA results.

Maxie will just be glad Nina knows the truth and can start healing. Meanwhile, Nina will indeed try to pick up the pieces of her broken heart. She’ll get more help from Jasper “Jax” Jacks (Ingo Rademacher) after she wakes up on his couch. Nina will seem startled as she looks up at Jax in her bridal gown. He’ll offer Nina some coffee and kind words, so it should be a surprisingly nice start to her morning.

Nina will remain distraught over the Sasha scheme, but at least she’ll have Jax to lean on. Over with Lulu Falconeri (Emme Rylan), she’ll face more backlash for ratting Sasha out. Charlotte Cassadine (Scarlett Fernandez) will be incensed as she has brunch with her mother. She’ll get fed up as Lulu tries to avoid the topic of why she ruined the nuptials.

Sooner or later, Lulu will have to give some form of an explanation. It’ll be a kid-friendly one, but Charlotte will hopefully grasp that things were complicated. Lulu will try to help Charlotte understand that she had to do the right thing. Nina deserved to know she was being deceived before she made a commitment.

Other General Hospital spoilers say Liesl Obrecht (Kathleen Gati) will just want Sasha gone. She’ll tell Valentin Cassadine (James Patrick Stuart) that they have to send Sasha packing permanently. Valentin screwed up big time, so he doesn’t need Sasha serving as a reminder to Nina. He might strategize on how to push her out of town, but Sasha will be determined to stay and accept responsibility.

Michael Corinthos (Chad Duell) will back Sasha up and hope she can avoid legal ramifications. He’ll trust that they still have a bright future, but GH viewers can expect another round of drama. Elsewhere, Hayden Barnes (Rebecca Budig) will bump into Hamilton Finn (Michael Easton). She’ll exhibit strange behavior and leave Finn with a hunch that he’s being lied to.

Finn will talk to Harrison Chase (Josh Swickard) about his suspicions and perhaps seek some advice. Chase can’t tell Finn how to handle this, but he might think addressing it quickly is best. He always pried the truth out of Willow Tait (Katelyn MacMullen) whenever she got cagey, and they worked through her issues together.

Of course, Hayden’s circumstances are very different from Willow’s. It’s one thing to lie in hopes of protecting your son from a dangerous cult leader. It’s quite another to leave a caring doctor in the dark about his daughter. Hayden hasn’t told Finn they have a little girl, but that shocker will come to light down the road.

Finally, General Hospital spoilers say Hayden, Curtis Ashford (Donnell Turner) and Laura Webber (Genie Francis) will have an important meeting. Laura will discuss the location of the codicil, which has been narrowed down to Spoon Island. That’s better than thinking it could be anywhere, but it still leaves them with a massive search area.

Thursday’s episode will deliver some chaos and fun, so don’t miss what’s in store. We’ll give you updates as other GH news comes in. Stick with the ABC soap and don’t forget to check CDL often for the latest General Hospital spoilers, updates and news.