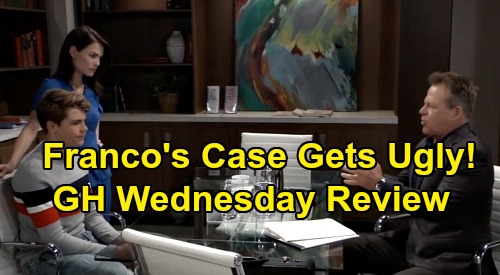 General Hospital (GH) spoilers review for Wednesday, October 9, reveal that Sam McCall (Kelly Monaco got some good news. After Damian Spinelli (Bradford Anderson) was given access to the recording of Sam allegedly saying that she wanted Shiloh Archer (Coby Ryan McLaughlin) dead, he was able to find a convoluted reason why the recording was tainted – and, long story short, Jordan Ashford (Briana Nicole Henry) ruled the recording inconclusive and dropped all charges against Sam.

Meanwhile, Jason Morgan (Steve Burton) decided that he was going to look hard into Peter August’s (Wes Ramsey) connection to Shiloh, and he was skeptical when he got a call saying that the (alleged) person who conspired with Shiloh in plotting his escape had been caught. Of course, Jason is pretty sure that Peter is the real person who conspired with Shiloh, and that this other person is probably a hired fall-guy.

Jason later spotted Peter at Kelly’s with Maxie Jones (Kirsten Storms) and had a few questions for him about what he was doing on the pier with a gym back. Maxie then blurted out that Peter wasn’t going to the gym and that he had a bag of cash with him. Peter then attempted to explain that he had withdrawn the cash as a down payment on an apartment by the pier. Jason didn’t buy the story at all, and Peter knew it.

Next, Kim Nero (Tamara Braun) met with Martin Gray (Michael E. Knight), who agreed to take Franco Baldwin’s (Roger Howarth) case and help him to fight against Elizabeth Baldwin’s (Rebecca Herbst) actions. As GH viewers know, Elizabeth wants to force Franco – who considers himself to be Drew Cain (Billy Miller) – to have a reverse memory procedure done, and neither Kim nor Franco want the procedure to be done given the very serious risks.

Martin promised Kim an aggressive campaign and a victory in “Drew’s” case. He outlined a plan to put “Drew” in the center ring in the precedent-setting case. He argued pretty compellingly that Franco was now Drew in every way that counts and that he shouldn’t be “defined by the vessel that contains him.” Martin gave Kim hope, and later when she visited with “Drew” at Shadybrook, they cuddled and kissed, and Kim was anxious to make plans for the future.

Meanwhile, Elizabeth met with Scott Baldwin (Kin Shriner) and Cameron Webber (William Lipton) about Franco’s upcoming case. Cameron felt strongly that he should testify about Franco and how he wanted to return to Elizabeth and his brothers. Scott agreed to the plan, as did Elizabeth, but Scott cautioned that Cameron would be seriously grilled by the lawyer representing Franco and Kim.

Later, Elizabeth shared with Scott that Kim had previously asked Drew to have another child with her, to try to replace Oscar Nero Quartermaine (Garren Stitt). Kim agreed to allow Scott to use Kim’s state of mind against her during the trial – after all, she’d do just about anything to get Franco back. It certainly sounds like the upcoming trial over Franco’s competency is going to get ugly and turn into a real battle between Kim and Elizabeth.