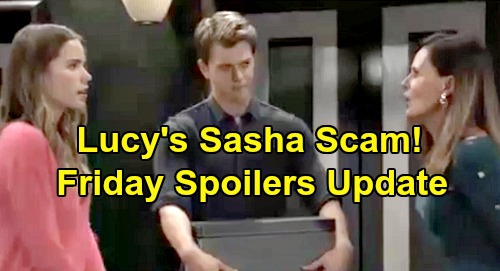 General Hospital (GH) spoilers update for Friday, October 11, teases Nina Reeves (Cynthia Watros) will struggle to believe a word out of Valentin Cassadine’s (James Patrick Stuart) mouth. He’ll try to sell her a bogus story about not knowing Sasha Gilmore (Sofia Mattsson) was a fraud. Nina will obviously find that hard to believe. The moment Sasha said she lied to make her fake mom happy, Nina thought this had Valentin written all over it.

Jasper “Jax” Jacks (Ingo Rademacher) will continue to be Nina’s rock as she deals with the crisis. It’s been a real blow to Nina, but she’s hanging in there with Jax’s help. Speaking of help, Josslyn Jacks (Eden McCoy) will hope she can come through for Dev Cerci (Ashton Arbab). Jax is wary of how Dev will affect Josslyn’s life, so it seems she’ll cook up a plot to soften her dad.

Dev will find Josslyn doing something that leaves him curious. He may have concerns about Joss making things worse, but she’ll think they should stay positive. Dev is really growing on Josslyn, so she’ll want to fix this if she can. Over with Sonny Corinthos (Maurice Benard), he’ll welcome Alexis Davis (Nancy Lee Grahn) in for a visit. It appears they may discuss Nina and Valentin’s derailed wedding.

Sonny will hope “she cleans him out,” so he might be referring to Nina slapping Valentin with a lawsuit. She could sue for emotional damages and hit Valentin in the wallet if she wanted. Meanwhile, Lucy Coe (Lynn Herring) will certainly have money on her mind. She’ll think the Face of Deception can make a whole lot of it now that Sasha’s proven herself to be a scamming beauty. This is pure gold for sales!

However, Sasha will want Lucy to slow her roll here. She already feels terrible about what she did to Nina. Making tons of cash off the lie isn’t something Sasha will be keen on. Even so, Lucy will work to convince Sasha that this could be great. Sasha will have to make a decision, so Michael Corinthos (Chad Duell) will pass along some advice.

Other General Hospital spoilers say Brad Cooper (Parry Shen) will push Julian Jerome (William deVry) too far. He’ll seek Julian’s assistance and throw around a threat or two in the process. Julian will go for the jugular soon enough. He’ll clutch Brad’s throat and make it crystal clear that he will NOT be threatened. Brad’s a joke compared to fierce Julian, so he’d better think long and hard about crossing him again.

Ava Jerome (Maura West) will arrive just in time to see Julian’s wild outburst, so she should worry. She’ll know Julian wouldn’t be lashing out like this without a good reason. Ava might fear her brother’s caught up in something awful, but she may not be able to pry the details out of him.

Still, Ava pointed out that Jeromes will always revert to their natural state. She may guess that’s happening thanks to whatever Julian’s up against. Of course, GH fans know Julian’s part of Brad’s baby swap chaos. Pressuring Julian to kill Nelle Benson (Chloe Lanier) may be why Brad earns that attack.