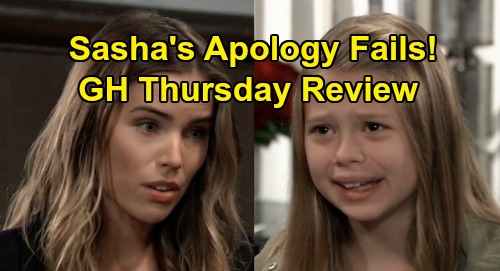 General Hospital (GH) spoilers review and recap for Thursday, October 10, reveal that Peter August (Wes Ramsey) put another phase of his devious plan into motion. As GH viewers know, Peter will do just about anything to keep his involvement with capturing Drew Cain (Billy Miller) in Afghanistan a secret – he just has too much at stake with Maxie Jones (Kirsten Storms) right now to let the truth come out. Well, as it turns out, the hired assassin that Peter hired to kill Shiloh Archer (Coby Ryan McLaughlin) was caught and arrested on Thursday’s episode, and he used his one phone call to contact Peter.

Of course, this upset Peter, but the assassin threatened to sing to the police, so Peter had to quickly come up with a plan, which was for the assassin to tell the police that Sam McCall (Kelly Monaco) hired him to break Shiloh out of custody. Unfortunately for Sam, there happened to be an FBI agent on hand to hear this fabricated detail, since Shiloh’s killing occurred in international waters and is now a federal crime. Things aren’t looking great for Sam, but it seemed that Jordan Ashford (Briana Nicole Henry) might have been skeptical about the assassin’s story, so Sam might have an ally there.

Meanwhile, Charlotte Cassadine (Scarlett Fernandez) was upset at brunch with Lulu Spencer (Emme Rylan) and Laura Collins (Genie Francis). She didn’t understand why her mother had to “ruin” Nina Reeves (Cynthia Watros) and Valentin Cassadine’s (James Patrick Stuart) wedding, and she said that she wanted to go see Nina. So Lulu and Charlotte headed to Crimson, where Charlotte immediately overheard Maxie say that Sasha Gilmore (Sofia Mattsson) was not really Nina’s s daughter.

That thoroughly upset Charlotte, and she started asking all sorts of questions. Just then, Sasha and Michael Corinthos (Chad Duell) walked in on the scene, and Sasha addressed Charlotte’s questions candidly, but Charlotte started crying and just wanted to leave. It was a bad scene, and was the start of Sasha’s grand apology tour. Earlier, she and Michael decided that she would stay in Port Charles and face the music, which clearly started with Charlotte.

Finally, Valentin and Liesl Obrecht (Kathleen Gati) bickered at Wyndemere over what to do about Nina and Sasha. Ultimately, Liesl figured that all hope was not lost – after all, Sasha only confessed to her own lie, and she didn’t directly implicate her or Valentin. That gave Valentin some hope, and Liesl went on to say that they needed to make sure that Sasha never returns to Port Charles and talks to Nina again.

Later, Laura showed up partially to gloat about Valentin’s wedding disaster, but also to inquire about the portrait of Helena Cassadine (Constance Towers). She told Valentin that she’d like to have the portrait, but Valentin told her that he had thrown it out just that morning and it had been taken away. That led to some bickering over the fact that the portrait rightfully belonged to Spencer Cassadine (Nicolas Bechtel), and Laura ended up telling Valentin that he’d regret throwing the portrait away and stormed out.

Of course, since there’s a good chance that the codicil to Mikkos Cassadine’s (John Colicos) will is actually inside the portrait somewhere, then it will probably turn up again somewhere. It could be in a garbage truck or a landfill at this point, but it’s probably traceable somehow.