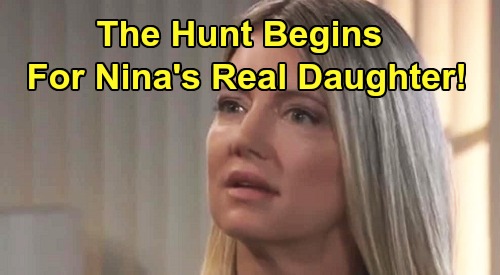 General Hospital (GH) spoilers tease that Nina Reeves (Cynthia Watros) is absolutely devastated. She faced a terrible scene at her wedding to Valentin Cassadine (James Patrick Stuart) when Lulu Spencer (Emme Rylan) stood up and insisted that Sasha Gilmore (Sofia Mattsson) was not really her biological daughter. Sasha outright admitted that Lulu was telling the truth, and now Nina is shattered.

Fortunately, Nina had Jasper “Jax” Jacks (Ingo Rademacher) to turn to for comfort and for a way out of the explosive scene, but things are going to be excruciatingly difficult for her going forward. She’s not only lost the woman that she thought was her daughter, but she’s lost Valentin as well. Her life will have to start over, and she’ll probably put most of her energy into Crimson and building her life back.

But at some point, once Nina gets out of her intense anger and grief that she’s facing right now, she’ll realize something…that she’s got a daughter out there somewhere who’s completely unknown to her.  Of course, there have been a lot of hints on GH that her daughter might be Willow Tait (Katelyn MacMullen), since she’s of about the right age to be Nina’s daughter and since she and Nina have never gotten along.

Who Will Spearhead The Search For Nina Reeves’ Daughter?

But that discovery seems pretty far off, as a whole search for Nina’s real daughter is probably in order next. But who will spearhead this search, and who will ultimately find Nina’s daughter for her? We see a few possible contenders, each of which is discussed below.

First off, there’s Jax, who might want to get in on the search for Nina’s daughter after witnessing her pain and anguish in the moments after her canceled wedding. Jax certainly has the resources to orchestrate a full-scale search for someone, plus Nina could conceivably work with him to track down her daughter. It would certainly be a vehicle to draw these two characters closer, which seems to be where TPTB are going.

Of course, there’s always Valentin, who might try to locate Nina’s daughter in a last-ditch effort to make good and win Nina back. He could run his own search in parallel to Jax’s search, and the two men could race to get to the finish line. Of course, if Valentin goes this route, he’ll totally be on his own with no help from Curtis Ashford (Donnell Turner) or anyone else this time. It would certainly be a lonely road.

Will Curtis Ashford Launch The Search, With His Wife’s Help?

And then there’s Curtis, who may feel so badly about getting duped by Valentin that he wants to do right by Nina and find her daughter. Curtis would potentially have the benefit of having Jordan Ashford (Briana Nicole Henry) and the power of the PCPD behind him if he went this route. Curtis will probably feel like he has something to make up to his good friend Nina, so he could launch his own investigation.

Of course, there’s someone else who feels terrible about the whole fake daughter scam, and that’s Sasha. She may want to try to make up her deception to Nina by finding her real daughter. The only problem would be that Sasha just doesn’t have the resources to investigate something of this magnitude. But Michael Corinthos (Chad Duell) certainly does, and he and Sasha could team together to locate the real daughter for Nina. Of course, since Michael is good friends with Willow, that could get interesting.

We’ll see what ultimately happens with this storyline, but it seems that someone’s going find the truth eventually…and we suspect the road will lead them to Willow, after some twists and turns along the way. Who do you think will ultimately find Nina’s real daughter? Stay tuned to the ABC soap and don’t forget to check CDL often for the latest General Hospital spoilers, updates, and news.