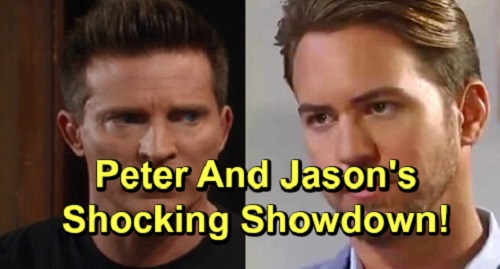 General Hospital (GH) spoilers tease that Sam McCall (Kelly Monaco) could be in serious trouble once again. Damian Spinelli (Bradford Anderson) convinced Jordan Ashford (Briana Nicole Henry) to deem the recording inconclusive, but two major snags have come up. For starters, Shiloh Archer (Coby Ryan McLaughlin) was killed on international waters, so this has become a matter for the FBI.

Unfortunately, Peter August (Wes Ramsey) struck the next blow through his minion. He ordered his lackey to claim Sam was the one who hired him, so it probably won’t be long until Sam’s hauled in for more questions. Just when Sam thought this was over, General Hospital spoilers say things are going to get worse.

Jordan will hopefully think the story’s fishy since she knows Jason Morgan’s (Steve Burton) line of work. If Sam wanted Shiloh dead, she would’ve had all the help she needed. However, Peter’s minion might suggest that Sam wanted to keep Jason’s hands clean. He could argue that Sam used him behind Jason’s back and went after deadly revenge.

Regardless, this case is out of Jordan’s control now. She may try to convince the FBI that it’s a setup, but they could make another arrest. That’s especially true if Peter cooks up more evidence. General Hospital viewers can tell Peter will do just about anything to keep his dark secrets under wraps.

Of course, we can guarantee this isn’t going to turn out well for Peter. Jason warned that if Peter was involved in framing Sam, his connection to Anna Devane (Finola Hughes) and Maxie Jones (Kirsten Storms) wouldn’t save him. It doesn’t matter who sees Peter as a good person. If Jason confirms Peter’s targeting Sam, Peter will definitely need to watch his back.

Could GH be building to the ultimate Peter and Jason showdown? Peter spared Jason’s life by keeping him alive at that Russian facility, but it wasn’t really an act of mercy. Peter wanted Jason to go after Cesar Faison (Anders Hove) for him eventually. When it comes down to it, Peter’s motives are always selfish.

Even so, it’s easy to imagine Peter begging Jason to return the favor. He may ask Jason to spare his life too, so Jason could have a big decision to make. Will Jason let Peter live or score lethal vengeance? We’ll give you updates as other GH news comes in. Stay tuned to the ABC soap and don’t forget to check CDL often for the latest General Hospital spoilers, updates and news.