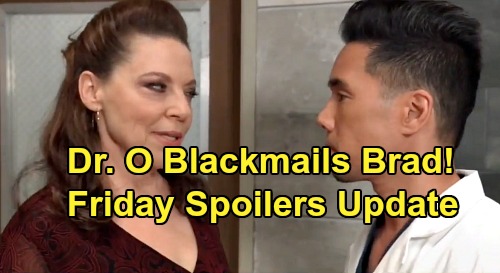 General Hospital (GH) spoilers update for Friday, September 6, tease that Jasper “Jax” Jacks (Ingo Rademacher) will be a man with a plan. He’ll hope to get settled in his new home and move Josslyn Jacks (Eden McCoy) in soon after. Sonny Corinthos (Maurice Benard) and Carly Corinthos (Laura Wright) may want Jax to slow his roll. They all need to come together with Joss and have a conversation about what’s next.

At school, Josslyn will seem annoyed and a bit blue. She’ll tell Dev Cerci (Ashton Arbab) she’s going to convince their classmates of two things. Perhaps that’ll tie in with selling Dev’s Corbin cousin status. She may also want to show everyone she’s OK after Oscar Nero Quartermaine’s (Garren Stitt) death, but she’ll be distraught as she gazes at his pic in her locker.

Elsewhere, Diane Miller (Carolyn Hennesy) will want some steamy details from Alexis Davis (Nancy Lee Grahn). She’ll wonder if the love making was transcendent, so it sounds like another dream chat. Maybe Alexis has had Neil Byrne (Joe Flanigan) on her mind at night lately! They could always return to the topic of Julian Jerome (William deVry), but GH is indeed gearing up for a Neil and Alexis romance.

At The Floating Rib, drag queen bingo night will be in full swing. Felicia Scorpio (Kristina Wagner) and Mac Scorpio (John J. York) discussed it recently, which set up the fun scenes ahead. Neil and Alexis will wind up awkwardly vying for some prizes. Manila Luzon from RuPaul’s Drag Race will bring some excitement, so these two had better be ready.

Whether Alexis and Neil intend to be there or just get caught up by mistake, their evening will take them out of their comfort zone. The evening will also be less than comfortable for Brad Cooper (Parry Shen), who’s been forced into helping Liesl Obrecht (Kathleen Gati). Hamilton Finn’s (Michael Easton) test results could’ve clued him in on the Sasha Gilmore (Sofia Mattsson) daughter lie, but Brad’s magic will prevent exposure. That should bring relief when Finn gathers Sasha’s loved ones for an announcement.

However, Brad will insist enough is enough. He’ll refuse to let Liesl blackmail him with the “Wiley Cooper-Jones” secret any longer, but that’s not his call to make. Liesl won’t appreciate it when Brad hurls threats. General Hospital spoilers say Dr. O gets to decide when their alliance comes to an end. There may be some other task for Brad to accomplish later, so Liesl probably won’t let him cut ties.

While Brad’s mess gets worse, Nelle Benson (Chloe Lanier) will hope to improve her own situation. She’ll find amusement by playing games with Shiloh Archer (Coby Ryan McLaughlin), but she’ll also seek a partnership. Nelle will think they can work to each other’s advantage. She’ll point out how their agendas collide and count on Shiloh to accept her offer.