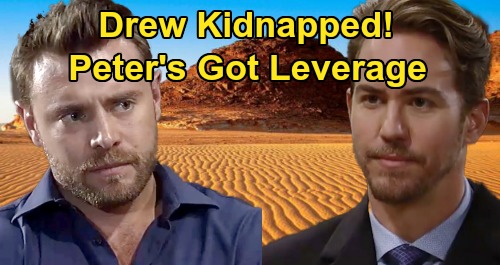 General Hospital (GH) spoilers reveal that Drew Cain’s (Billy Miller) missing plane will bring growing fears. The jet dropped off the radar, so Drew has vanished without a trace. That’s seemingly a bit too open-ended for Drew’s exit. His loved ones would never stop searching if Drew was left MIA. The latest GH info points to that plane eventually turning up, but it should be in bad shape when it’s found.

It looks like the plane crash wreckage will be discovered, but will that really be the end of the story? Perhaps it could actually be a new beginning, but some other drama has to play out first. Peter August (Wes Ramsey) delivered orders to someone over the phone, but those orders didn’t pan out exactly like he wanted. Peter hoped to prevent Drew from finding Andre, but they actually met up.

It seems Peter’s goal was to order the hit on Andre and have Drew return home empty-handed. Since the meeting happened and Andre returned to Port Charles, there was apparently a forced changed of plans. That led to Andre getting stabbed in PC and Drew’s disappearing act on his way to Afghanistan.

However, we should point out that Peter felt incredibly guilty about Drew and Jason Morgan (Steve Burton) in his nightmare. Peter wasn’t putting on an act since the fantasy played out in his own brain. Of course, he’s certainly not a good guy since he had someone try to kill Andre. Peter would’ve finished Andre off if he’d had the opportunity, so that shows how far he’s fallen again.

Even so, Peter got to know Drew a bit and genuinely seemed to feel bad about what he put him through. There may have been some emotional attachment. Drew has a family who loves him, and Peter’s been around to see these interactions. There’s a good chance the plane crash will simply stop Drew’s loved ones from searching – at least for now. Drew may actually be stashed someone until GH recasts or Billy Miller returns.

It’s interesting that General Hospital brought Jason in on this. He’s part of the investigation now and has been questioning who would want Andre dead. Could Jason be the one to discover Peter’s nefarious plan? Robert Scorpio (Tristan Rogers) is another great option, but it could always be a team effort.

That brings us to what’ll happen once the jig is up for Peter. He’s destined to get busted, so GH could write him out or he could get off the hook. If it’s the latter, could Peter bargain for his freedom by using Drew’s whereabouts as leverage? That might extend Peter’s stay in Port Charles and allow for a desperate rescue, which could bring a Drew recast or Billy Miller into the picture.

This mystery is just starting to unravel, but it’s worth considering the outcome of all this down the road. General Hospital spoilers say there’s still hope for Drew’s future, even without Billy Miller in the role. We’ll give you updates as other GH news comes in. Stay tuned to the ABC soap and don’t forget to check CDL often for the latest General Hospital spoilers, updates and news.