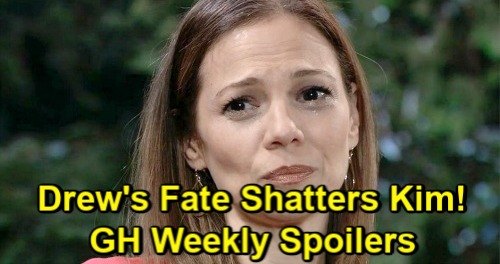 General Hospital (GH) spoilers for the week of September 9-13 tease that some surprises are in store. First, Brad Cooper (Parry Shen) will make a risky decision. As Liesl Obrecht (Kathleen Gati) revs up the pressure, Brad will decide to tell Julian Jerome (William deVry) the whole truth. He previously told Julian that he exchanged dead Wiley Cooper-Jones for the baby of a random homeless woman.

Julian believes Brad and Lucas Jones (Ryan Carnes) are raising a child that wouldn’t have been properly cared for otherwise. He’s in for a shock when he realizes Nelle Benson (Chloe Lanier) was the other baby swapper. Julian will fly off the handle and leave Brad with another problem on his hands. Brad will expect Julian’s loyalty, but Julian will consider coming clean for Michael Corinthos’ (Chad Duell) sake.

Speaking of Michael, he’ll observe something intriguing. That’ll probably tie in with this Julian situation. Michael might reflect on Wiley resembling him at that age or find some other comparison to draw. It could add to Julian’s guilt and leave him on the verge of confessing.

However, Ava Jerome (Maura West) will bring a twist of fate. It looks like her inadvertent advice will convince Julian to keep his mouth shut. He’ll choose to help Brad, so more trouble’s brewing. Over with Elizabeth Baldwin (Rebecca Herbst), she’ll grow increasingly desperate. Liz just wants her husband back, but Franco Baldwin (Roger Howarth) has no interest in his family. He’s all about Kim Nero (Tamara Braun).

General Hospital spoilers say Kim will be unable to resist something – or more likely, someone. Will we see another make-out session or perhaps more? A hookup’s probably going to happen at some point, so we’ll see how long it takes. In the meantime, Jason Morgan (Steve Burton) will have some big news. His updates could bring a devastating blow for Kim in the week ahead.

Kim will indeed end up shattered, so that might involve the real Drew Cain’s (Billy Miller) fate. Drew is currently missing, but GH spoilers still point to a presumed death in a plane crash so far. That could be staged as part of Peter August’s (Wes Ramsey) plan. It could also be genuine if Drew’s plane was tampered with, but it’ll be tough for Drew’s loved ones either way.

Curtis Ashford Has A Top Secret Meeting With Laura Webber

On a happier note, there’ll be a reason to celebrate elsewhere. Nina Reeves (Cynthia Watros), Valentin Cassadine (James Patrick Stuart) and Liesl Obrecht (Kathleen Gati) will come together to rejoice. Sasha Gilmore (Sofia Mattsson) may finally be out of the woods by then and Nina would certainly want to live it up over that.

At the park, Curtis Ashford (Donnell Turner) will have a top-secret meeting with Laura Webber (Genie Francis). He’ll fill Laura in on the codicil mission and what it could mean for Spencer Cassadine (Nicolas Bechtel). Of course, this is probably all building to the return of Nikolas Cassadine (Tyler Christopher). Now that Laura’s becoming part of the story, things should start heating up.

Finally, General Hospital spoilers say Sonny Corinthos (Maurice Benard) will find runaway Dev Cerci (Ashton Arbab). It seems the teen will get spooked over something and bolt, but Sonny will make sure Dev sticks around. We’ll keep you posted as other GH details emerge. Stay tuned to the ABC soap and don’t forget to check CDL often for the latest General Hospital spoilers, updates and news.