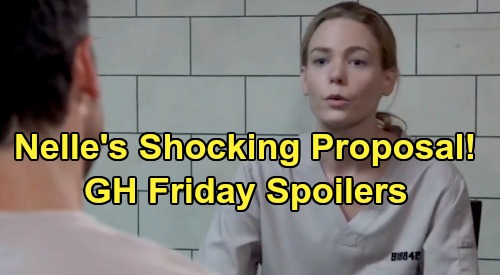 General Hospital (GH) spoilers for Friday, September 6, tease that Alexis Davis (Nancy Lee Grahn) will get grilled. Diane Miller (Carolyn Hennesy) will want to know if the “sex was transcendent,” which will earn a slightly sheepish grin from Alexis. They might be discussing another one of Alexis’ fantasy hookups. Maybe she’s had a Neil Byrne (Joe Flanigan) sex dream this time; that would certainly get Diane curious!

Later, Alexis and Neil will find themselves out of their element. Mac Scorpio (John J. York) and Felicia Scorpio (Kristina Wagner) mentioned that they’ve started drag queen bingo nights at The Floating Rib. That doesn’t seem like Neil and Alexis’ thing, but they may decide to be adventurous – or perhaps they’ll just end up joining the fun inadvertently. Either way, they’ll share scenes with Manila Luzon from RuPaul’s Drag Race.

At GH, Hamilton Finn (Michael Easton) will round up Sasha Gilmore’s (Sofia Mattsson) loved ones. He’ll suggest they should all hear this together, so he probably means the latest test results. This particular test could’ve brought some DNA red flags, but Liesl Obrecht (Kathleen Gati) roped Brad Cooper (Parry Shen) into making sure everything lined up for Sasha and Nina Reeves (Cynthia Watros).

Brad’s handiwork will pay off, but he’ll once again remind Liesl that their business is concluded. He doesn’t want Dr. O holding his secret over him forever. Liesl won’t be pleased by what she views as a threat. She’ll probably make it clear that she’s the one calling the shots here, so Brad will remain at Liesl’s mercy for as long as she desires.

Other General Hospital spoilers say Josslyn Jacks (Eden McCoy) and Dev Cerci (Ashton Arbab) will head to school. Josslyn will have a plan, which seemingly involves making sure Dev looks like a legit Corbin cousin. She may also hope to show everyone that she’s strong and doesn’t need their pity after Oscar Nero Quartermaine’s (Garren Stitt) death.

Elsewhere, Jasper “Jax” Jacks (Ingo Rademacher) will catch Sonny Corinthos (Maurice Benard) and Carly Corinthos (Laura Wright) off guard. He’ll suggest that once he’s settled at his new place, Josslyn can move in with him. Carly and Sonny love having Joss in the Corinthos home, but they all need to focus what’s best for her as well as what she wants. This definitely needs to be a discussion, not just Jax’s decision.

At Pentonville, Nelle Benson (Chloe Lanier) will entertain herself by playing some mind games with Shiloh Archer (Coby Ryan McLaughlin). However, she’ll also have a goal during this chat. General Hospital spoilers say Nelle will present an opportunity to Shiloh. She’ll see some overlap in what they want, so she’ll insist they can help each other.

It sounds like another exciting episode’s coming up. We’ll give you updates as other GH news emerges. Stay tuned to the ABC soap and don’t forget to check CDL often for the latest General Hospital spoilers, updates and news.