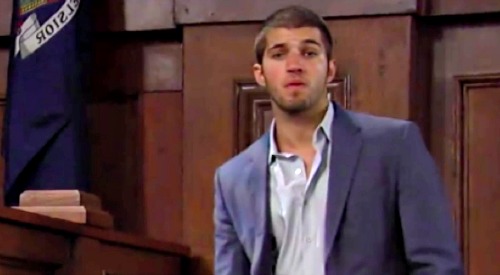 General Hospital (GH) spoilers reveal that one ABC soap alum’s future is up in the air. GH fans will recall Bryan Craig’s portrayal of Morgan Corinthos. Morgan’s memory has been kept alive through family stories and cemetery visits, so he’s never far from viewers’ minds. Of course, Morgan is merely presumed dead. There are no guarantees Morgan is gone for good since that leaves the door open for a return.

It’s surprising GH hasn’t recast the role already, but it remains unfilled and waiting for Craig to potentially reclaim it. Craig scored the part of Javi Mendoza on ABC’s primetime drama, Grand Hotel, but that show’s at risk of being canceled. The network is taking a “wait and see” approach based on the ratings for the last leg of the season, so they should be making a decision soon.

Grand Hotel recently aired their season finale, which Craig posted about on his Instagram account. He couldn’t offer any confirmation on the show’s future either way, but he expressed hope for more episodes. Craig is grateful for this wild ride no matter the outcome.

“I wish I had more news about a Season 2 but the future for now is unknown,” Craig said. “But! I do know you all play a massive role in what happens so #GrandHotelSeason2 and Thank you all for your continued support and love.”

We wish Craig the best of luck in his career, but we have to acknowledge that Grand Hotel hasn’t done huge numbers. ABC would’ve preferred a bigger hit, so it’s certainly possible they’ll ax it and try something else in that timeslot. Grand Hotel has a loyal and passionate fanbase, but ratings are ratings. They have to consider what’ll make the network most successful and Grand Hotel may not be it.

If Craig loses his latest role, could that lead to a return at General Hospital? Craig has been focused on pursuing primetime work, but that doesn’t rule out a daytime TV comeback. If GH makes Craig the right offer and he decides it’s in his best interest, it could easily happen. It’ll be interesting to see how this whole situation plays out.

General Hospital spoilers say Sonny Corinthos (Maurice Benard) and Carly Corinthos’ (Laura Wright) baby may not survive, so their family could use some good news down the road. Would you like to see Bryan Craig back as Morgan Corinthos? We’ll give you updates as other GH details emerge. Stay tuned to the ABC soap and don’t forget to check CDL often for the latest General Hospital spoilers, updates and news.

Well… a big cheers to our @grandhotelabc @abcnetwork Season Finale next Monday. I’m very sure you all will be extremely pleased with this last episode, and if you’re not caught up now is your chance. You can catch the rest of the season at either @hulu or @amazonprimevideo. I wish I had more news about a Season 2 but the future for now is unknown……But! I do know you all play a massive role in what happens so #GrandHotelSeason2 and Thank you all for your continued support and love . 😘