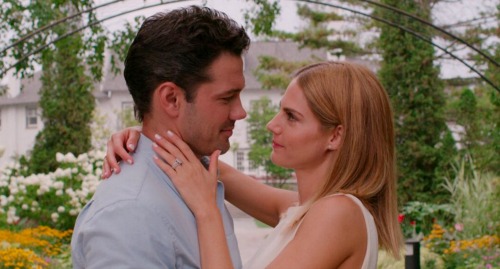 General Hospital (GH) spoilers have some great news to pass on about a new project for an ex-GH star. Ryan Paevey, who portrayed Nathan West on the ABC soap, will be appearing in a new Hallmark Channel movie called “From Friend to Fiance.”

Ryan will be playing the lead role of “Ted” in the movie. The movie’s official longline is as follows: “When Ted gets engaged to the high school mean girl and asks Jess, his childhood best friend, to plan their wedding, things get complicated. Her true feelings for Ted keep getting in the way.”

Ryan will be in good company in “From Friend to Fiance.” The film co-stars Jocelyn Hudon, who will be playing opposite Ryan as “Jess.” Jocelyn has appeared in several TV series, including 21 Thunder, Ice, and The Strain. The movie also stars Kelly Kruger as “Kimberly.” You may remember Kelly from The Young and the Restless as Mackenzie Hellstrom.

This will not be Ryan’s first Hallmark Channel movie. He starred in two previous movies in 2018, including “Marrying Mr. Darcy” and “Hope at Christmas.” It seems that Ryan is finding his groove in his post-GH days with the Hallmark Channel, and his fans couldn’t be more pleased. Ryan also guest-starred on the TV series Brooklyn Nine-Nine in 2018, so he’s been busy.

“From Friend to Fiance” is scheduled to air on Monday, May 27. Will you be tuning in? Stay tuned to the ABC soap and don’t forget to check CDL often for the latest General Hospital spoilers, updates, and news.

#BFFBride has a new name and finally an air date. Now “From Friend to Fiancé”, it should air on Hallmark Channel Monday May 27 at 8:00 PM / 7:00c. pic.twitter.com/WK1oDppLyO

Now to the Dremel….. pic.twitter.com/D6TjxkYJIP