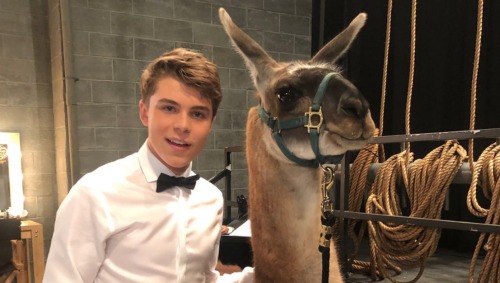 General Hospital (GH) spoiler tease that Cameron Webber (William Lipton) will continue to be there for grieving Josslyn Jacks (Eden McCoy). Can we just take a moment to acknowledge what a wonderful teen character Cam is? He’s your classic bad boy with a good heart, and we couldn’t love him more.

Cameron has had his fair share of run-ins with the law, including the time he planned to buy marijuana for Oscar Nero Quartermaine’s (Garren Stitt) appetite. He also missed his community service hours once, but that was because Oscar suffered a seizure in Niagara Falls. When Cameron screws up, there’s usually a sympathetic reason behind it. That adds so much depth to the character.

Although Cameron didn’t handle the situation with Aiden Webber (Jason David) exactly right, he cares about his little bro. Cameron is a great big brother who only wants to protect Aiden as well as Jake Webber (Hudson West). It melts GH fans’ hearts to see Cam stepping up for them and trying to help, even if he makes mistakes along the way.

Of course, we also have to acknowledge William Lipton’s fantastic performance. He gives Cameron some edge when he needs it, but he can bring that softer side out with ease. The perfect example of that was when Cameron put on a tough act after Oscar’s death. Cam pretended he wasn’t that close to Oscar when Elizabeth Baldwin (Rebecca Herbst) and Franco Baldwin (Roger Howarth) talked to him.

Once Cameron was alone, Lipton delivered authentic moments of grief as Cam slid down the wall in tears. We saw Cameron’s true feelings shining through. At the time, many General Hospital fans admitted that was the moment that really got them. It made Oscar’s passing seem real and added a difficult yet necessary punch to that somber episode.

At the Nurses Ball, Lipton even managed to deliver solid scene with a llama! The premise might’ve been silly, but Lipton’s performance wasn’t. Plenty of GH viewers were genuinely moved as Cameron related to feeling out of place like the llama and opened up about Oscar. It shouldn’t have worked on paper, but Lipton brought his A-game and made it memorable.

On Twitter, General Hospital fans were eager to weigh in. “Cameron’s heart-to-heart with the llama is everything,” one GH watcher said. Another exclaimed, “Cameron talking to that Llama was hilarious but oh so cute!!!” Even Eden McCoy added a comment by replying to someone’s tweet. She admitted “that llama loved him,” so Budgie is clearly a Cameron and Lipton fan like the so many viewers.

General Hospital spoilers say Cameron and Josslyn’s love story will inevitably develop down the road. They have nice chemistry, so fans will be eager to watch their friendship bloom into a romantic relationship. We can’t wait to see how things blossom between them.

Are you loving Cameron’s rebel with a good cause vibe? Do you think William Lipton’s been an excellent addition to the teen scene? We’ll give you updates as other GH news comes in. Stay tuned to the ABC soap and don’t forget to check CDL often for the latest General Hospital spoilers, updates and news.

that llama loved him😂💖